Jon Huntsman: GOP Is ‘Devoid Of A Soul,’ Needs ‘Strong Dose Of Libertarianism’

Jon Huntsman: GOP Is ‘Devoid Of A Soul,’ Needs ‘Strong Dose Of Libertarianism’ 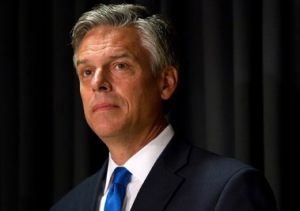 Former Republican presidential candidate Jon Huntsman took a critical look at his own party, asserting that it is “devoid of a soul.” In a lengthy interview with the UK’s Daily Telegraph, Huntsman elaborated on what he viewed as missteps, and offered some advice going forward.

It’s “troubling” that the party currently doesn’t have a leader or a “defined agenda.” But the good news, he said, is “that will come in time” through the “reformation process.” The GOP must “return the system to the people,” Huntsman argued.

In particular, he noted that the party would do well to embrace a “strong dose of libertarianism.” On social issues specifically, Huntsman said state governments should “absolutely” be able to implement gay marriage.

Recalling the Republican primary race, during which he was a candidate, Huntsman said the process didn’t favor “long-term competitive candidates,” who would have fared better against Democrats.

“The party right now is a holding company that’s devoid of a soul and it will be filled up with ideas over time and leaders will take their proper place,” he said. “We can’t be known as a party that’s fear-based and doesn’t believe in math.”

“In the end it will come down to a party that believes in opportunity for all our people, economic competitiveness and a strong dose of libertarianism,” he said.

Speaking of the future, Huntsman refused to name names when it came to which rising Republican stars he supports. New Jersey Gov. Chris Christie, Florida Sen. Marco Rubio, and Mitt Romney‘s former running mate Congressman Paul Ryan “all deserve high marks individually,” he said — but the GOP must go through “a very competitive process in terms of ideas.”

Audio of the interview here.