Josh Earnest: Carson Is Not Under More Scrutiny Than Obama Was in 2008
video

Josh Earnest: Carson Is Not Under More Scrutiny Than Obama Was in 2008 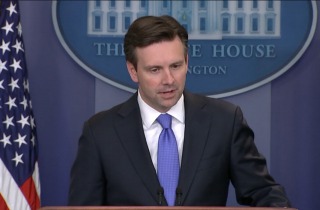 White House Press Secretary Josh Earnest does not believe that Republican presidential candidate Ben Carson is under more scrutiny today than then-Sen. Barack Obama was in 2008, saying at Monday’s press briefing that the questions Carson is facing over his past statements are entirely appropriate.

Carson, the current GOP frontrunner, has been under the media spotlight over anecdotes he has told in books and speeches about his past, including incidents that suggest a tumultuous childhood that Carson has used to suggest that he was able to overcome such obstacles and became a successful doctor. Reporters have also questioned Carson’s specific claims about whether he received a scholarship or was offered admission to the U.S. Military Academy at West Point.

In a heated press conference on Friday, Carson addressed the controversies, saying specifically that he does not remember the political press focusing as much on Obama’s past statements and associations during the vetting process in 2008, his first White House run.

“This process is good for our democracy,” Earnest said in response to a question from ABC’s Jonathan Karl. “It’s not easy to run for president. It shouldn’t be. And … when they make public comments, [they] are going to have their claims scrutinized, even if they’re claims about their own biography. That’s part of the process.”

In 2008, Earnest said, the issue with the campaign cycle was not that Obama’s specific claims were called into question, but that erroneous statements made about him were “difficult to disprove.”

Earnest justified the coverage Carson has been receiving, describing it as an essential part of the vetting process:

“What’s true now is a situation where you have Dr. Carson’s own claims that he has long been making and written about that are being subjected to scrutiny. And that’s an important part of the process. It ensures that whoever emerges from this difficult process is somebody that is capable of leading the country. But most importantly, it gives voters the opportunity to carefully consider the candidates’ views and their claims in depth before they have to go to the voting booth or show up at a caucus location.”

Watch the video above, via the White House.