Juan Williams: It’s Silly To Make A Big Deal About The Use Of The The Word ‘Retarded’ 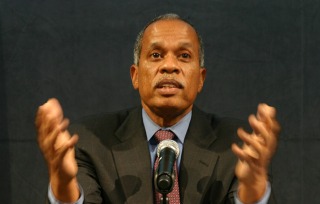 Fox News’ Juan Williams is currently making the media rounds to promote his new book, Muzzled: The Assault On Honest Debate, and, as such, offered a quite candid interview to Philly Mag‘s blog.

Williams delved into some of the fallout surrounding his dismissal from NPR after sharing that he felt uneasy seeing people in Muslim garb at airports, including a comment former NPR ombudsman Alicia Shepard made about his having stayed at NPR as long as he had because it “gave him cred” with the mainstream media. Williams disagrees, to say the least:

What? I’m stunned. Maybe she missed it, but I had a long career at the Washington Post as a Congressional correspondent, White House correspondent, I was working at CNN, co-hosting Crossfire, working at Fox… I had written best-selling books. Before I got to NPR. There are facts in the world. There is a record.

If Terry Gross was on a television show and admitted that she crossed the street when a black man was walking towards her, should she be fired?

I remember when Jesse Jackson said he gets nervous when he sees young black men. I live in a black neighborhood in a big city. If I see some rowdy black kids coming my way, I’m looking to avoid that situation. It’s a matter of personal safety. It’s not a matter of bigotry.

Ok, but what about describing something stupid or absurd as “retarded”? Where does Williams stand on that? America needs to know!

I think we’re at a point where we don’t know what’s acceptable to say. I once jokingly used the word “retarded” on a local radio show and got some pretty nasty hate mail.

That’s ridiculous. These special interest groups say you shouldn’t say retarded. You should say developmentally disabled. It’s silly to make a big deal about it. It’s like language police. You’re made into a villain. It’s being done to enforce a certain speech code. It leads to resentment, anger. It leads to people thinking we’re not allowed to read books by dead white men even if they’re great books. What a waste of time. Just have an honest conversation.

What about you, readers: Do you agree with Williams’ assessment? Or do you find it totally, like no offense, retarded and sort of gay?