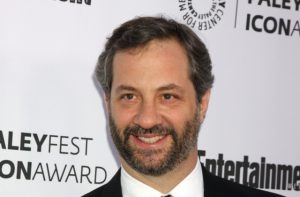 Judd Apatow has never been shy about his feelings about President-Elect Donald Trump. Throughout the election, he used his Twitter account and participated in interviews where he expressed his concerns about the then-candidate, even going so far as to call him an “idiot” and a “crazy person.” Since the election, he hasn’t stopped- he’s used his social media to disseminate information and share his opinions on the future President:

It would be so easy for Trump to say everyone has a right to their opinion in America. He is too stupid to know what makes him look strong. https://t.co/D8Rc1Dj3Gp

It would be so easy for Trump to say everyone has a right to their opinion in America. He is too stupid to know what makes him look strong. https://t.co/D8Rc1Dj3Gp

If a democrat was being investigated for colluding with Russian there is no scenario where the GOP would say the nominee is legitimate. https://t.co/4D1dbYAFmw

Over the weekend, the New York Times published an interview Maureen Dowd did with the writer, director, and comedian where he elaborated on some of his thoughts. Apatow said that if you want to know how Trump is going to govern, look at his reality TV gig. “I watched an enormous amount of The Apprentice… Donald Trump sits in his office. He sends his kids to watch the teams do their missions. Then they come back and tell him what they think of it and then he makes an impulsive decision based on the information that Donald Jr. or Ivanka give him. That’s how he’s running the country.”

What does he think would be productive now? He talked about the Internet, and the danger there: “You think you’re accomplishing something… So you see an article about a disease and retweet it and think ‘It’s cured now!’ And you’ve fooled yourself into thinking that you’ve done something productive.”

Instead, he said he plans to actually involve himself with one or two causes. That way, he says, he can be “a positive part of the process.”

For the full piece, head over to the New York Times.