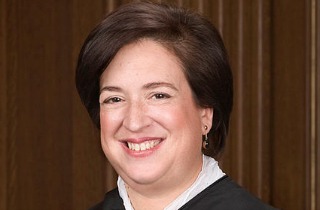 The Supreme Court ruled today that legislative prayer sessions are not in violation of the Establishment Clause of the First Amendment, but Justice Elena Kagan issued a strong dissent taking a shot at her colleagues’ “blindness” on the issues at stake. Kagan writes that she doesn’t believe town meetings should be “religion-free,” but does not believe that a meeting in which members of the public are present is the place for reciting specifically Christian prayers, because “that practice does not square with the First Amendment’s promise that every citizen, irrespective of her religion, owns an equal share in her government.”

She cites hypothetical cases in which it would be inappropriate for public officials to state a Christian prayer, with the expected pressure that everyone should participate, such as an election official who asks prospective voters to join him in prayer before voting.

Kagan also strongly dissents with her colleagues on what she believes they are blind to in the facts of the case.

I have no doubt that every member of this Court believes as firmly as I that our institutions of government belong equally to all, regardless of faith. Rather, the error reflects two kinds of blindness. First, the majority misapprehends the facts of this case, as distinct from those characterizing traditional legislative prayer. And second, the majority misjudges the essential meaning of the religious worship in Greece’s town hall, along with its capacity to exclude and divide.

Kagan also notes that no public official should be showing preference to one religion over all others to be truly representative.

You can read the court’s opinions on the case here (Kagan’s dissent begins on page 56).