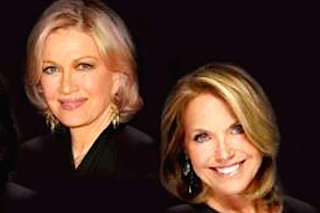 ), but the galleys are making their way around the TV news industry and have apparently landed on the desk of The Daily Beast’s Lloyd Grove.

In Grove’s reading, Katie Couric “comes off as brash, striving, self-absorbed, and occasionally insensitive to the realities faced by her less well-compensated coworkers, yet steeled by personal tragedy (the cancer-related deaths of her husband and her sister) and capable of big-hearted generosity.”

Diane Sawyer “is a Machiavellian, often-inscrutable workaholic who uses her seductive charm and good looks to professional advantage and torments news producers with her relentless perfectionism and insecurity—an apparent consequence of a fraught relationship with her judgmental, formidable mother.”

And Christiane Amanpour “is the reigning queen of the warzone, more physically courageous and resourceful than her male colleagues in perilous combat situations, but with an occasionally off-putting sense of moral superiority which, along with her posh British accent, sometimes renders her brittle and inaccessible to American audiences.”

But it’s one quote from Couric, reportedly overheard by an unnamed source, that stands out above all else. After ABC News’ Sawyer landed an exclusive interview with a 57-year-old woman who had just given birth to twins, her CBS News rival Couric said, “I wonder who she blew this time to get it.”

Couric has since moved on from CBS, first to a daytime talk show and now to Yahoo. Sawyer is set to step down from her role as anchor of ABC World News as of September 2.

Read the full report at thedailybeast.com.