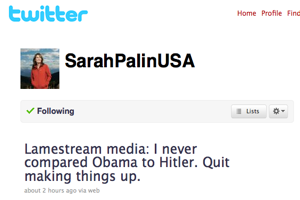 It’s Friday night, and Keith Olbermann and Sarah Palin are having a debate! Well, not really, but this is about the closest to direct contact that can be expected, and we have Twitter to thank for it. Olbermann is taking Palin to task for recommending an article suggesting that the BP escrow fund gives President Obama similar powers to an economic initiative passed under Hitler, and then attacking the “lamestream media” for pointing that out.

It started when Palin tweeted out a controversial piece by Thomas Sowell entitled “Is U.S. Now On Slippery Slope To Tyranny?” In it, Sowell compares the BP agreement to reserve $20 billion for victim claims to a Nazi law that expanded Hitler’s power:

“During the worldwide Great Depression, the German Reichstag passed a law “for the relief of the German people.”

If the agreement with BP was an isolated event, perhaps we might hope that it would not be a precedent. But there is nothing isolated about it.”

Palin wrote to her followers with a link to the article, reminding Republicans that the media was out to get them on the BP bank account issue:

“GOP: Don’t let the lamestream media suck you into “they’re defending BP over Gulf spill victims” bs… this is about the rule of law vs. an unconstitutional power grab. Read Thomas Sowell’s article: http://u.nu/6e4ec”

A few hours later, she wrote a grumbling retort to all those who pointed out that Sowell’s Hitler reference was, at best, controversial: “Lamestream media: I never compared Obama to Hitler. Quit making things up.” This seemed to trigger something in Olbermann, because he lashed out at her in a series of tweets questioning how, exactly, Palin had not endorsed the view that the bank fund was similar to a provision passed under Hitler:

“Madam, you linked to Sowell doing exactly that”

“Have you yet disavowed Sowell’s comparison?”

Palin hasn’t replied yet, but here’s to the former governor owning up and responding with a rationale for her tweet, or even a defense of Sowell’s comparison. Both Palin and Olbermann have a vast influence in the two extremes of our political culture, and there is a lot to be learned from having two of the most prominent (and different) minds challenge each other into being better thinkers. It’s also worth marveling at the power of short-form online social networking to connect people, and eliminates any excuse not to question someone’s ideas to their face, as it only takes a few seconds and a click to do so. Olbermann seems to relish that opportunity; nothing bad could come out of Palin doing the same.