Keith Olbermann Checks Out Of Daily Kos After Criticism From Left 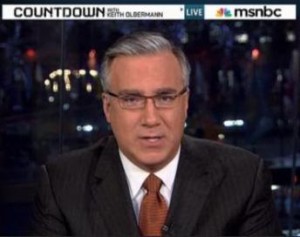 After taking heat from some of his liberal fans on Twitter over his strong criticism of Pres. Barack Obama‘s Oval Office speech Tuesday, Keith Olbermann stopped into another of his new media stomping grounds to find more of the same.

Now he’s leaving The Daily Kos after reading a “diary trashing first me and my colleague Rachel.”

Olbermann wrote a blog post, presumably his last for awhile, headlined “Check, Please”, as a response to the diary he found and one particular comment that insinuated his criticism came because attacking the President was good for ratings (a pretty strange notion when discussing MSNBC). “It can’t be verified because it’s nonsense, and it wasn’t checked because nobody bothered,” wrote Olbermann. “Unfortunately there’s been a lot of this here lately.”

According to Olbermann, this is symptomatic of a larger issue at the liberal site that he has been a part of for years now, and he’s ready to go his separate way:

You want Cheerleaders? Hire the Buffalo Jills. You want diaries with conspiracy theories, go nuts. If you want this site the way it was even a year ago, let me know and I’ll be back.

Salon’s Glenn Greenwald tweets, “Not saying this isn’t thin-skinned – it is – but what he’s reacting to is very common.”

It’s interesting to see Olbermann react strongly to the commenters who, almost universally, have been supporter of his show and his network. As he sticks with his ‘non-Obama-cheerleader’ position, it’s now clear there are some in this country far farther left than he is. It is a testament to the polarized American public that Olbermann would be on the outs with the Daily Kos and his liberal Twitter followers.