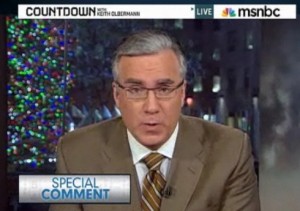 During a Special Comment segment last week,Countdown host Keith Olbermann showed his displeasure with President Obama‘s compromise on the Bush Tax Cuts by comparing it to Nazi appeasement. At Monday’s White House briefing, I asked Press Secretary Robert Gibbs if the White House had any reaction to the comparison.

In a series of tweets Monday, Olbermann denied that he had made such a comparison. This is really quite simple: despite his Rush Limbaugh-esque use of a rhetorical escape hatch, he did, in fact, compare the tax compromise with Nazi appeasement.

Olbermann’s defense appears to rest on two pillars: the notion that he disclaimed the comparison as he was making it, and the fact that Chamberlain’s appeasement applied to Italy, as well.

Responding to followers who asked about my question to Gibbs, Olbermann tweeted:

This is factually incorrect.I specified I was NOT making such a comparison RT @keachhagey Olbermann’s tax cut deal=Nazi appeasement comment

Olbermann is referring to this verbal emergency exit, smack dab in the middle of a ten-plus minute segment in which he quoted extensively from Winston Churchill’s Munich Agreement speech:

The Churchill quotation — as opposed to the quotation from the very Senior member of your Administration, Mr. President — is from October 5th, 1938.

I don’t want to make any true comparison to the historical event to which it related; the viewer can go ahead and look it up if they wish; I will confess I won’t fight if anybody wants to draw a comparison between what you’ve done with our domestic politics of our day, to what Neville Chamberlain did with the international politics of his.

There’s an obvious logical disconnect here, like a guy beating your face in while saying “No offense.” Olbermann even tips his hand when he says he doesn’t want to make a “true comparison,” an indication that he knows he’s making some kind of comparison.

He then falls back on the notion that appeasement wasn’t just about the Nazis:

@AblativMeatshld So a reference to Chamberlain’s appeasement – which applied to Italy as well as Germany – is invoking the Nazis?

@GidgetWA I didn’t. I brought up a British politician whose policy was to appease Germany AND Italy.

@kletus2513 Chamberlain’s official policy – and it was equally directed at Italy and Mussolini – was appeasement.

To follow up on this: Formal British foreign policy in the ’30s was appeasement – it was directed equally at the Italians and Mussolini.

Unfortunately, the speech from which Olbermann draws his inspiration, and much of its text, is just about the Nazis.

Look, I have no problem with people saying outlandish things. I’m sure I do it all the time. The politics of our time demand fire-breathers and boundary-pushers.

What I object to is the craven use of fig leaves to weasel out of trouble when people get upset about it, the stock in trade of the right-wing talking heads whom Olbermann so frequently derides. If Keith Olbermann wants to be able to criticize people like Rush Limbaugh or Glenn Beck, he has to be better than them, and not by a little bit.

In an amusing coincidence, when Olbermann first learned that someone had asked Gibbs about his comment, he assumed the questioner was Les Kinsolving. As it happens, at yesterday’s briefing, Les Kinsolving mistook himself for me, and question-jacked my turn. I took a lot of needling for letting him roll over me, but I was always taught to respect my elders. Here’s the full video of yesrterday’s questions, from C-Span: