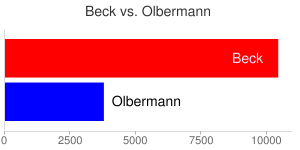 Countdown host Keith Olbermann is touting (via his Twitter feed) a report by AOL’s John Merline that questions the ingrained canard of a liberal media bias by examining the amount of coverage given to a handful of political/media figures. While Merline’s study might seem to support the idea of a conservative media bias, a closer look reveals that it is less-than-persuasive.

The recent University of Maryland study that has been used to club Fox News like an insolent baby seal contains far more damning evidence of a wider bias.

Merline’s study measured, in head-to-head comparisons, the number of stories devoted to Sarah Palin vs. Joe Biden, Christine O’Donnell vs. Alvin Greene, and Keith Olbermann vs. Glenn Beck. In each case, the conservative figure nearly doubled the total of their liberal counterpart.

The most obvious flaw, though, is that Merline doesn’t measure the type of coverage in each case. Sarah Palin, for example, is a publicity supernova, but you don’t need a Stat-O-matic to know that most of that publicity is negative. Part of this is due to a reality bias, some would argue, but even when she’s trying to help cholera-stricken Haitians, she can’t catch a break.

Comparing Christine O’Donnell with Alvin Greene is similarly fraught. O’Donnell’s story contained several elements that gave it far more legs than Greene’s. O’Donnell’s star was handily refueled whenever it began to dim with a new clip from Bill Maher‘s Politically Incorrect, and her “I am not a witch” campaign ad was a nuclear media missile. Once again, though, positive stories about O’Donnell were few and far between.

Perhaps it was the Olbermann vs. Beck comparison that caught the MSNBC star’s eye, and it’s one that is much more in this site’s wheelhouse. While both receive a tremendous amount of coverage at Mediaite, it is interesting to note the difference in the way each of them reacts. While Beck has been frequently and harshly criticized by this site, he has consistently praised us for our fairness.

Olbermann, on the other hand, despite about an even mix of positive to negative coverage, responds to a neutral factual inquiry by calling me a “hatchet man,” a “phony,” and (indirectly) a douche. While he frequently derides “former half-Governor” Sarah Palin for her thin skin, he seems to share the trait.

In any case, while AOL’s study doesn’t prove a conservative bias, that doesn’t mean there isn’t one. The recent study by the University of Maryland has been widely hailed as an indictment of Fox News, and while that’s the sexy angle to take, it misses a larger, scarier point. In many cases, the level of misinformation promoting conservative talking points on the Big 3 networks’ evening newscasts was nearly identical to that of Fox News, an indication that the right has a much larger echo chamber than just Fox News.

Most of the reporters I talk to agree that if there’s a bias in the news media, it is not to the left or the right, but toward laziness. The fact that people seem to get their news from sources that reinforce their own opinions indicates that the media is, in turn, breeding lazy viewers.

Note: Tommy Christopher also writes for Asylum.com, which is owned by Politics Daily parent AOL, and was also a founding contributor to Politics Daily.