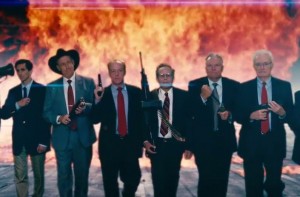 As the battle over the Iran deal waged in Washington in the summer of 2015, the comedy video website Funny or Die released a video called “The Dealbreakers” mocking the GOP opposition. In the video, benign-looking representatives of Iran and the United States peacefully make a mutually beneficial deal, before war-mongering Republican Senators run in and destroy it with guns and explosives. “You think we can’t get away with this sh*t again?” asks one Republican as another cackles, “Who’s going to stop us?”

It was amusing, crude, over-the-top, certainly insulting of the GOP senators in question… and secretly funded by an organization that the Obama administration has identified as one their top surrogates.

The actual video provides little evidence of who exactly funded it, only directing viewers to visit the generic-sounding url www.stopwarwithiran.com to sign a petition. The Huffington Post exclusive unveiling the video likewise didn’t mention that it was funded by an outside group. But a press release released shortly afterwards by an organization called New Security Action revealed that they had paid for the video as part of a digital advertising push.

That alone isn’t shocking. While Funny or Die has always had a leftward tilt, its full-throated advocacy for liberal political issues kicked up a notch in 2014 when they partnered with the White House to raise awareness for Obamacare enrollments. Since then, they’ve opened a D.C. bureau headed by former Obama White House staffer Brad Jenkins. The bureau’s bread and butter: making humorous videos funded by liberal action groups to promote issues like the minimum wage, gay marriage, and yes, the Iran deal.

But it was certainly an interesting move for the little-known New Security Action. It’s website at the time showed it was almost exclusively dedicated to opposition to Guantanamo Bay, with virtually no interest in topics like Iran. The organization appeared to be largely dormant: its last press release was put out in October 2009 and its last blog post was dated December 2010.

Less than a year later in February 2016, New Security Action had essentially ceased to exist. Its social media accounts haven’t posted in months and its website has been replaced with a WordPress blog with a single fact-sheet on Guantanamo. The listed phone number connects to the Center for International Policy, another liberal think tank. The man identified as director of operations in the press release has been a director at the organization Win Without War for the past five years, and his LinkedIn page doesn’t list working for a New Security Action.

So how did an obscure organization in hibernation suddenly get the manpower and cash reserves required to fund a sleek ad campaign, only to return to nothingness months later? Simple: they had help.

The anti-nuclear weapon nonprofit Ploughshares Fund has been in the news recently after comments made by White House national security adviser Ben Rhodes in a profile by The New York Times. In it, Rhodes brags about having used nonprofits and other administration allies to parrot Obama administration talking points to clueless reporters. One of the organizations he mentions by name is Ploughshares Fund.

“We created an echo chamber,” he said “They were saying things that validated what we had given them to say… We had test drives to know who was going to be able to carry our message effectively, and how to use outside groups like Ploughshares, the Iran Project and whomever else…”

Ploughshares received even more scrutiny after the Associated Press reported that they were funding news organizations to report on the Iran Deal at the height of the political battle, including NPR, The Nation, ThinkProgress, and Mother Jones. Ploughshares defended the grants, saying in a press release that “it is common practice for foundations to fund media coverage of under-reported stories and perspectives.” NPR likewise denied that the $100,000 grant slanted coverage in any way.

What went unreported by AP was that Ploughshares wasn’t just funding hard news, it was also behind entertainment, specifically the Funny or Die video. Not directly, mind you. Instead, they funded New Security Action, which in turn funded the video campaign.

According to Ploughshares’ 2015 annual report, New Security Action received a pair of grants for $25,000 each: the first, to “develop an online ‘hub’ that highlights the latest information related to the P5 + 1 nuclear negotiations with Iran,” the second, for “mobilization of a broad base of public support of the negotiated settlement with Iran on its nuclear program.”

But the third and largest donation was for $95,000, to fund “management and implementation of an online comedic video produced by Funny or Die that supports the negotiated settlement on Iran’s nuclear program.”

At no point did New Security Action reveal that their ad campaign was being bankrolled by an even larger nonprofit, which in turn boasts huge donations from big liberal donors like the MacArthur Foundation, George Soros‘ Open Society Foundation, and the Rockefeller Brothers Fund. At no point did Ploughshares take credit for a video depicting its political opponents as insane loons.

Mediaite reached out to Funny or Die, asking whether they knew it was actually Ploughshares funding the video. We also asked Ploughshares why they used an essentially defunct shell organization to fund Funny or Die, instead of doing so directly. Neither responded to our requests for comment by press time.