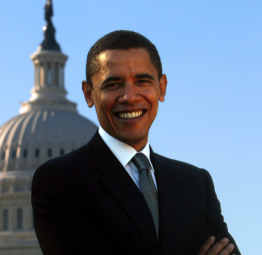 Just when you thought the Birther conspiracy theories had died out under the weight of actual news like the BP oil spill, and the Times Sq. Bomber, along comes a ‘report’ that the first three digits of President Obama’s social security number apparently suggests it was applied for in Connecticut. Before we go any further probably best to note that this news comes from World Net Daily (and inadvertently Google…more on that below), the website that derives much of its funding from selling birther paraphernalia.

The site is reporting that “Two private investigators working independently” have discovered “President Obama is using a Social Security number set aside for applicants in Connecticut while there is no record he ever had a mailing address in the state.” Also, “WND has copies of affidavits filed separately in a presidential eligibility lawsuit in the U.S. District Court of the District of Columbia by Ohio licensed private investigator Susan Daniels and Colorado private investigator John N. Sampson.”

Alas, (shockingly!) copies of the affidavits are not provided in the post. Also, this is not a new theory. But since it’s currently making its way up the Google trends hot list it might be just the sort of thing to bubble up on cable news between segments as a “you decide” filler once people get tired of the depressing BP oil video. Or, alternately, will cause Anderson Cooper’s head to actually explode on live television.

Meanwhile, the story itself has managed to birth a whole other conspiracy that Google was trying to suppress the results. Earlier this morning when you searched “obama social security” the top two results directed visitors to two non-related stories on Politico. Strangely, I think may have achieved the opposite of “suppression.” In fact, I suspect the weird results may have inadvertently given the report some legs as they made it appear, on first glance, that this was a serious news story — you had to click through and read a two page article to discover there was no mention of it there. Google told Free Republic that some “bug in the snippets” caused the wacky results and has since been fixed…sort of. You still get Politico results if you click through to Google News. 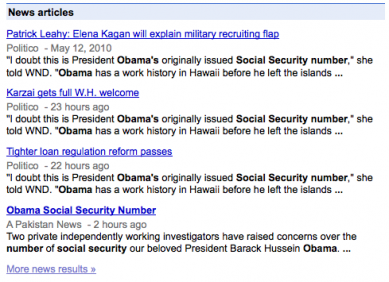