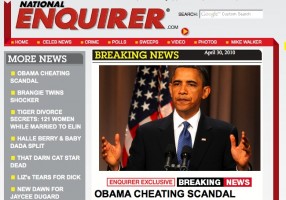 The story of John Edwards‘ affair with Rielle Hunter seems to have raised a media meta-quandary about how to treat stories reported by The National Enquirer. Should we report on them? Should we report that they’re being reported? Throw in a Drudge link to an already explosive rumor like, say, the President covering up an affair with a former campaign staffer, and it’s damn near irresistible. In reality, though, there’s not much of a dilemma for those who cover media. Of course it’s worth reporting.

Let me start by saying that the National Enquirer story looks to be, in my eyes at least, complete crap. It consists of an anonymously (single) sourced rumor, bolstered by the fact that people who are out to get President Obama are willing to pay $1 million to get someone to repeat said rumor on the record. Some blogs are reporting that the Enquirer has independently confirmed the account, but that’s not even what Enquirer claims. “An ENQUIRER reporter has confirmed the limo driver’s account…”

What that actually means is that they heard about the rumor, and the anonymous limo driver confirmed that he had started it. Weasel words and vapor-thin sourcing are their stock-in-trade.

Initially, the report also claimed that a surveillance tape, which showed Barack Obama and Vera Baker entering and exiting a hotel together, may exist. They have since revised their story available online to indicate that the existence of such a tape inhabits the realm of possibility, in much the same way that Sasquatch or a funny Dane Cook joke theoretically exist.

Even if such a tape were produced, it would no more prove an affair than a similar tape from the DC Marriott Wardman would prove an affair between Hot Air’s Ed Morrissey and I. Which by the way, that footage also probably exists. We’ve entered and left hotels. Stop the presses.

Suddenly, though, because the Enquirer got the Edwards thing right, there are some who think the media ought to chase the tabloid around. This misses the entire point of the media’s failure on the Edwards story, and sets a dangerous precedent.

See, there are two kinds of Enquirer stories: 1) the ones that try to make a dollar out of fifteen cents using crummy sourcing and weaselly, sensational reporting, and 2) the Edwards story. The media was right to be skeptical about the Edwards story, given the Enquirer‘s well-earned reputation. Where they slipped up was not actually reading it.

There were named sources, photographs, and solid reporting on the Edwards story that should have at least made other news organizations take a closer look, and do some reporting of their own.

The flip side to this coin is that sometimes, well-respected newspapers engage in poorly-sourced sleaze. During the 2008 presidential campaign, the New York Times ran a story in which they reported, through anonymous sources, that several of John McCain‘s staffers believed rumors of an affair between their candidate and lobbyist Vicki Isemann. They rightly caught hell for it, but stuck to their guns.

Similarly, the authors of the political tell-all Game Change included a reference to a rumored Cindy McCain affair, even after lecturing the media about attacking her during the campaign. That story also sprang from the Enquirer‘s pages, and it, too, was amplified by a powerful online news presence.

So, on any given day, you can trust the Enquirer, but not the New York Times? How do you make order from this confusion?

It’s actually pretty simple. An educated news consumer could have properly judged any one of these stories based simply on their own merits. Such judgments should be second nature, then, to those within the media. Don’t consider the source, consider the story.

Having said all of that, the fact that Matt Drudge promoted this story does have a narrow, though significant, amount of news value, particularly for a media website. In fact, it provides a wonderful opportunity to create a more educated news consumer.

Matt Drudge is a very powerful media figure, capable of drawing white-hot attention to any story, but he is not a journalist, nor does he claim to be one. As such, he doesn’t claim the responsibilities of a journalist. As Chuck Todd pointed out, it is the job of responsible journalists to exercise appropriate skepticism, to show restraint, even when it could be profitable not to do so. Also, to those who seek to minimize Drudge as a purely partisan animal, keep in mind that he did the same thing to McCain, beating the NYT by several months to the Isemann story. When you get right down to it, Drudge is a Click-o-crat.

Finally, there’s the issue of Mediaite’s coverage of this story. You might have noticed that my description of how this story should be covered doesn’t exactly match up with the way our Frances Martel initially covered it.

One of the great things about this site is the diversity of voices here. It is for this reason that I have the freedom to express my opinion about what was written here. Mediaite does a lot of original reporting, but when “re-reporting,” the emphasis will naturally tip toward opinion and analysis. While I might have concerns with the opinion and analysis in Frances’ story, as I do with many stories here and elsewhere, the last thing I want is for there to be any chill on the diversity we have achieved here. Rabid partisans already have plenty of places to go. I value the ability to agree to disagree.

As Colby Hall noted, there is nothing wrong with a media site reporting on this story, in and of itself. You’ve just read how I would have reported it. Even absent the Drudge link, the Edwards story does make the Enquirer’s political stories worthy of scrutiny. I think that Frances misplaced that scrutiny on the details of the allegations, and the potential narrative that might emerge, rather than on the merits of the Enquirer’s reporting.

Still, the freedom that Frances exercised in this story is the same freedom that allows me to write this, or to get up in Andrew Breitbart‘s grill when he’s trying to avoid a question. You don’t see Mediaite Shustering me off of Twitter at the first sign of trouble.

If you’re looking for a site that confirms what you already believe, this is probably not the place for you. If you like writers who challenge you, and at times even anger you but often make you think, then I believe you will enjoy Mediaite.