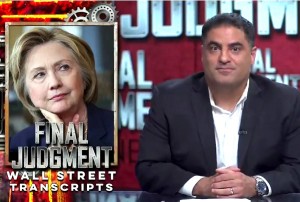 In the waning and desperate hours of Bernie Sanders‘ presidential campaign, many of his supporters are hoping for something akin to a miracle that will deliver Sanders a win over Democratic presidential frontrunner Hillary Clinton. This may not quite do the trick, but liberal host and founder of pioneering online news show The Young Turks Cenk Uygur is making the case that with only three people still running for president, the conditions that Hillary Clinton set for the release of her Wall Street speeches have been met. Uygur’s premise is that since neither Bernie Sanders nor Donald Trump has given paid speeches to Wall Street groups, Hillary should keep her word and release her transcripts now:

As it happens, I agree with Uygur that Hillary should have released those transcripts a long time ago, but not because I think there’s anything all that damaging in them. Embarrassing, yes, but with all the currency that has been invested in this attack, it’s hard to believe that if a truly damaging snippet existed, it would not have been leaked by now. The mystery that Sanders and his supporters are pushing is more damaging than anything she might have said.

Uygur is also correct that Trump doesn’t appear to have given speeches to groups like Goldman Sachs, but was reportedly paid $1.5 million per speech for a series of 17 Learning Annex lectures. Again, if Trump assessed that Hillary’s transcripts could undo her, why wouldn’t he have released those by now? He loves the sound of his own voice more than he loves even the poorly educated. Could it be that Trump knows the innuendo is more damaging than the speeches?

In any case, there’s a loophole for that. The last time this came up at a debate, Hillary said she’d release her transcripts “if everybody agrees to do it — because there are speeches for money on the other side.” Technically, that standard hasn’t been met.

Substantively, there actually is a decent argument for insisting on a uniform standard, because it is a dead certainty that even if Hillary did release the three transcripts in question, the demand would then extend into infinity, until people were shrieking “What’s Hillary hiding in her 5th grade oral report on Are You There God? It’s Me Margaret? Release the transcripts!”

That rationale would have felt a lot stronger, however, if Hillary’s initial reaction to the transcript demand hadn’t been “I’ll look into it,” followed by the obviously workshopped later response. To the extent that it even matters anymore, I still think Hillary would be better off dumping those transcripts this Friday night than letting imaginations run wild.