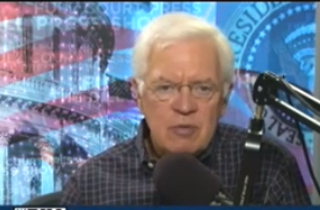 On his radio show Monday morning, Bill Press took on this weekend’s Million Vet March by denouncing the participants as “idiots” who’ve been used by “right-wing organizations” to protest against their own best interests. Ultimately, he said, they shouldn’t be following people like Sen. Ted Cruz (R-TX), they should be expressing public odium towards him.

“Absolutely drives me crazy,” Press said of Sunday’s protest activities. “Here’s what wrong with it,” he continued, “Those three idiots leading the protests, but they’re not the dumbest ones. The dumbest ones there are the idiots that are protesting. These are people, they call them vets. I wonder how many really were veterans. I don’t care if they were veterans; they don’t know what they hell they were doing.”

He continued on to express bewilderment at the movement’s support for Texan Sen. Cruz:

“I mean, how dumb can they be? Don’t they realize that the guys that they were cheering yesterday, Ted Cruz, is the guy behind the shutdown? He’s the guy, doesn’t everybody know that? Not those idiots. He’s the guys that came up with this idea that has proven to be a colossal failure. That the way to destroy and kill and get rid of Obamacare, the Affordable Care Act is to shutdown the government. That was his idea adopted by the House Republicans and it’s a total failure. Total failure. And we wouldn’t have entered the shutdown yet, but they’ve abandoned the idea of getting rid of Obamacare.”

Listen below, via the Bill Press Show: