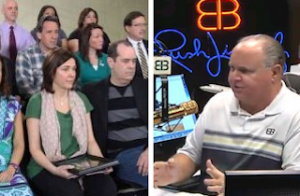 Ahead of this morning’s weekly presidential address, which President Obama turned over to one of the mothers who lost her child in the Sandy Hook Elementary School shooting, Rush Limbaugh went after the Democrats for “hiding behind” the Newtown parents and turning them into “human shields.”

“This is how all opposition is silenced,” Limbaugh said on his radio show. “This is how it’s done. You can’t dare talk about the issue now because opposing Obama’s agenda is opposing these people, is opposing these parents, is having no heart.” He predicted that Republicans would soften their dedication to gun rights because otherwise they will be portrayed as being heartless.

“They’re trying to turn the Newtown parents into a dozen Cindy Sheehans in a way,” Limbaugh asserted, reviving a name rarely heard in political media since the height of the Iraq War. “It’s what the Democrats do, folks. They always try to hide their agendas behind women and children, and, most of all, victims. So the Newtown parents are human shields, in a sense.”

Finally, Limbaugh summed up the Newtown parents’ role in the current debate as such: “to protect the Democrats from any criticism, and to shut it down. Pure and simple.”

Parents and family members of those killed at Sandy Hook Elementary School last December have been in Washington, D.C. this week as guests of the Obama administration to make their case to Congress on why they think new gun legislation is needed. Speaking during the weekly address released this morning, Francine Wheeler, mother of 6-year-old Ben, said, “We have to convince the Senate to come together and pass commonsense gun responsibility reforms that will make our communities safer and prevent more tragedies like the one we never thought would happen to us.”