Limbaugh On Christie Speech: ‘I Don’t Think There’s Anyone Out There Who’s Better’ 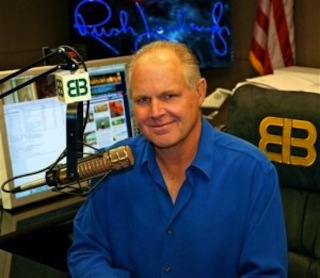 The big news of today (besides the ongoing saga of Nancy Grace’s breast) was Chris Christie’s speech at the Reagan Library. Today, Rush Limbaugh weighed in, saying that “Christie just has it!” and that he doesn’t think there’s anyone out there who’s better.

However, that still doesn’t mean he didn’t have a few criticisms…

Mostly, Limbaugh didn’t love any part of the speech that could in any way be interpreted as treating Democrats or President Obama as actual human beings. There was a theme of non-partisanship through Christie’s speech and we all know Limbaugh’s feelings on compromise. He also took issue at Christie’s notion that any of “Obama’s failures” were in part “our failures” as well. That’s the kind of wishy-washy compassionate speak to don’t sit well with ol’ Rushbo.

However, there were other parts of the speech that Limbaugh liked and he was especially a fan of the off-the-cuff Q&A that followed. And, in the end, he explained that he understood Christie’s decision not to run.

“You have to really want it and, if you don’t, then don’t even get close to it. This is not something you do without a full-fledged, 150% self-commitment. This is a life changing – a forever life changing – event to run for president. And, if you go and get the nomination to actually be your party’s standard-bearer, it changes your life forever. And it’s something where you have to have an ego that says, ‘Country and world can not survive without me.’ That’s almost what it takes. It’s so arduous, the media anal-exam that you get as a Republican. So, if he really is being truthful when he says he’s not ready, he’s not into it yet, he ought to be listened to.”

That being said, Limbaugh did point out that Christie made allusions to foreign policy which is odd for a state governor. Which is nice because we totally don’t want this conversation to ever, ever end, do we?