Limbaugh On Halperin: The Word ‘Dick’ Is Inappropriate But Lying About GOP Is Fine? 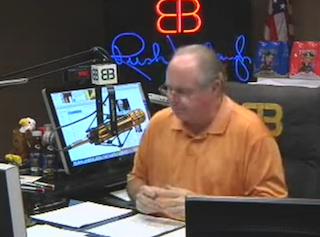 Today on his radio show, Rush Limbaugh gave his thoughts on the indefinite suspension of MSNBC contributor Mark Halperin who said President Obama was acting like “kind of a dick” on Morning Joe yesterday. Limbaugh used his old standby argument that no one would have cared if someone called President Bush that word but then went on to wonder why it’s inappropriate to say that but not at all a problem to lie about Republicans and their policies.

He also discussed his love of “deedling” little old ladies. No, that doesn’t mean what you think it does.

Limbaugh also gave a lesson in broadcasting, explaining why his show had a 40-second delay. Part of the reason was that he liked to have fun with it, bleeping out kindly old ladies who said nothing wrong. Of course, the conversation was a little confusing considering that Limbaugh chose to use the word “deedling” instead of “bleeping” or “censoring.” Even the host had to admit that some listeners with sick minds might be getting the wrong idea.