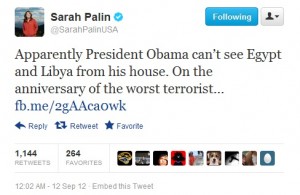 As Republicans like Mitt Romney and Newt Gingrich rush to politicize the violence in Egypt and Libya that has claimed five American lives so far, former Alaska Governor Sarah Palin has added an extra layer of awful human being by taking to her Facebook and Twitter accounts to crack wise about the violence, and to spread the same lies that Romney and Gingrich have. Just after midnight, Palin tweeted “Apparently President Obama can’t see Egypt and Libya from his house. On the anniversary of the worst terrorist…” with a link to her Facebook posting:

Apparently President Obama can’t see Egypt and Libya from his house. On the anniversary of the worst terrorist attacks ever perpetrated on America, our embassy in Cairo and our consulate in Benghazi were attacked by violent Islamic mobs. In Cairo, they scaled the walls of our embassy, destroyed our flag, and replaced it with a black Islamic banner. In Benghazi, the armed gunmen set fire to our consulate and killed an American staff member. The Islamic radicals claim that these attacks are in protest to some film criticizing Islam. In response to this, the U.S. embassy in Cairo issued a statement that was so outrageous many of us thought it must be a satire. The embassy actually apologized to the violent mob attacking us, and it even went so far as to chastise those who use free speech to “hurt the religious feelings of Muslims.” (Funny, the current administration has no problem hurting the “religious feelings” of Catholics.)

But where is the president’s statement about this? These countries represent his much touted “Arab Spring.” How’s that Arab Spring working out for us now? Have we received an apology yet from our “friends” in the Muslim Brotherhood for the assault on our embassy?

It’s about time our president stood up for America and condemned these Islamic extremists. I realize there must be a lot on his mind these days – what with our economy’s abysmal jobless numbers and Moody’s new warning about yet another downgrade to our nation’s credit rating due to the current administration’s failure to come up with a credible deficit reduction plan. And, of course, he has a busy schedule – with all those rounds of golf, softball interviews with the “Pimp with the Limp,” and fundraising dinners with his corporate cronies. But our nation’s security should be of utmost importance to our Commander-in-chief. America can’t afford any more “leading from behind” in such a dangerous world. We already know that President Obama likes to “speak softly” to our enemies. If he doesn’t have a “big stick” to carry, maybe it’s time for him to grow one.

As we pointed out earlier, the statement by the U.S. Embassy in Cairo was not a “response” to the violence that had already claimed one American life when Palin released her statement, it was made before any of the protests began. But aside from being a liar, Palin proves herself to be a callous ghoul, leaping to stuff every unrelated political issue she can think of into her exploitation of tragic American death, and glibly cracking wise even as more Americans were yet to be killed in the unfolding situation, even throwing in a dick joke at the end, for good measure.

Give Palin credit for one thing, though. Unlike Gov. Romney, she was at least able to hold her stream of dim consciousness off until after the anniversary of the September 11th attacks had passed. For two whole minutes.