Maher: Ryan Is ‘Smartest Guy In The Party,’ Palin Is ‘Stupidest Woman On Earth, But They Agree On Everything’
video

Maher: Ryan Is ‘Smartest Guy In The Party,’ Palin Is ‘Stupidest Woman On Earth, But They Agree On Everything’ 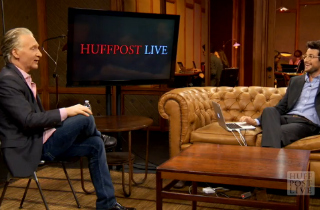 “I heard Joe Biden the other day say, ‘What’s gutsy about his plan?'” Maher told host Jacob Soboroff. “Which is what I’ve been saying way back when Paul Ryan first presented his plan. Why does the media go after this idea he’s so ‘gutsy’ and he’s ‘bold’? What is gutsy about this plan?”

Maher then attacked the media notion that Ryan is a serious intellectual who will refocus the election into a policy discussion: “Why is he the intellectual of the Republican Party? He has, from what I can see, two ideas: One, let’s stop having rich people pay taxes at all, and poor people should look for food in the woods. This is the intellectual? He’s a step up from Sarah Palin?”

“Actually, you know, he’s more articulate than Sarah Palin,” Maher conceded. “[But] tell me one area where he and Sarah Palin would disagree. I cannot find one area. So somehow he’s the smartest guy in the [Republican] Party and she’s the stupidest woman on earth, but they agree on everything.”