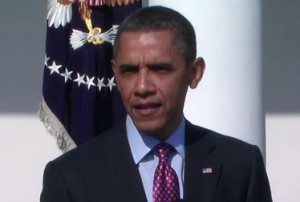 To hear some conservatives tell it, President Obama tore racial unity asunder with his Friday remarks about the tragic death of Trayvon Martin, while liberals have a predictably more favorable view. Perhaps a better barometer of the President’s success at conveying the proper sentiment is from a trusted, down-the-middle guy like National Journal‘s Major Garrett, who called the President’s remarks “One For The History Books.”

In his column, Garrett briefly assesses the President’s handling of the Trayvon Martin story, and places it within thorough context of the President’s oft-criticized approach to race. From National Journal:

With that one sentence, President Obama on Friday placed himself in the middle of a raging national debate as a parent, a president, and an African-American speaking to and for the black “community.”

White House officials said that Obama was eager to discuss the killing of Trayvon Martin and has tracked carefully the twin components of the Florida crime: the shooting of the unarmed teen and allegedly slipshod police investigation and the broader sense of grievance African-Americans of all socio-economic backgrounds feel about the unspoken threat of violence posed to their children.

His decision to wrap his arms around Martin’s family and give voice to thousands who have taken up their cause may be a watershed moment in his presidency.

After tracing the bread crumbs from then-Senator Obama’s speech on race in response to the Jeremiah Wright controversy, to the troublesome Skip Gates ordeal, and criticisms that he has tried too hard to avoid “any real or imagined stereotype of an African-American president governing or speaking specifically on behalf of African-American interests,” Garrett concludes that, with his handling of the Trayvon Martin tragedy, “his manner, words, and tone may mark a turning point in his presidency when it comes to matters of race and justice and how he is perceived on these issues by African-Americans.”

It’s an excellent examination of the President’s handling of race, and while his conclusion is probably correct, the question that remains is whether he threaded that same needle for everyone else. With the exception of the most hardened Obama-haters, I think he may have.

Every decent American who has heard the Trayvon Martin story feels some sort of connection to the tragically slain teenager, and every one of us also possesses a varying degree of distance from him. President Obama’s brief remarks were perfectly attenuated to measure both distances, and to bridge them. When I first saw Trayvon’s school photo in a news report, I immediately felt the pain of his loss through the window of my own angel-faced teenager, but also the distance of the bitter gratitude that my white son will never face the same peril. My friend Goldie Taylor saw her own sons, for whom she has had this specific worry, from a distance many steps closer. President Obama has two daughters, and so felt the pain as a father, and as a black man who has faced the gaze of the George Zimmermans and Sanford police of the world, but doesn’t know the unique stresses of raising a young black man among people who consider him a suspect first. Here’s the President’s response again, so you can see the key points: (emphasis mine):

But obviously, this is a tragedy. I can only imagine what these parents are going through. And when I think about this boy, I think about my own kids. And I think every parent in America should be able to understand why it is absolutely imperative that we investigate every aspect of this, and that everybody pulls together — federal, state and local — to figure out exactly how this tragedy happened.

So I’m glad that not only is the Justice Department looking into it, I understand now that the governor of the state of Florida has formed a task force to investigate what’s taking place. I think all of us have to do some soul searching to figure out how does something like this happen. And that means that examine the laws and the context for what happened, as well as the specifics of the incident.

But my main message is to the parents of Trayvon Martin. If I had a son, he’d look like Trayvon. And I think they are right to expect that all of us as Americans are going to take this with the seriousness it deserves, and that we’re going to get to the bottom of exactly what happened.

If there was any solace in the Trayvon Martin story, it was that, even after nearly two weeks on the national radar, we seemed to have avoided the polarization that often accompanies high-profile racial incidents. In my view, this is due more to the specific elements of Trayvon’s story than to whatever progress we might have made since, say, the Bernhard Goetz shootings, or the Rodney King verdict, or the O.J. Simpson trial.

Shortly after the President’s remarks, however, some conservatives pounced, and in supremely ugly fashion. The Daily Caller ran a story attempting to paint President Obama’s remarks as a direct response to pressure from the New Black Panthers, a despicable Scare Whitey smear that has been thrown at the wall for years.

Former House Speaker Newt Gingrich, who proposed drafting urban 9 year-olds into janitorial service, and who thinks “the black community” is “satisfied with Food Stamps,” had the stones to accuse President Obama of being divisive, and of “turning it into a racial issue,” as if it was Obama who trained generations of cops to view young black men as suspects. This is the current dodge among Southern Strategy dead-enders; racism isn’t racism, pointing out racism is racism.

Now, there are well-known conservatives who are pushing the notion that the real injustice here is that Trayvon Martin’s death and disposal by George Zimmerman and the Sanford police is overshadowing the story of Allen Coon, a 13 year-old white boy who received first-degree burns when, he says, he was doused with gasoline and set on fire by two black 16 year-olds, a story that is actually being investigated by police. If you’re thinking, “That’s not even close to the same thing,” it’s not supposed to be; the real message here is that the blacks are scary.

Unless I missed something, this wave of ugliness from some (only some) conservatives began when President Obama commented on the story, as if they were waiting to pounce. The hope is obviously to create another Skip Gates scenario, which the cowardly mainstream press allowed to become a huge political negative for the President.

But I think Major Garrett is right, I think this time will be different. In the Skip Gates case, many people identified with the white cop because they saw Skip Gates as being uppity and ungrateful to a man who was just trying to protect him. Whether you think Gates was wise to mouth off to Sgt. Crowley for barking orders at him in his own home, the President was right, it was stupid for the police to arrest him.

Normal people identify with Trayvon Martin in this case, and with the President’s sentiments. All the Obama-deranged likes of Newt Gingrich will succeed at here is alienating the middle, and probably a good chunk of their own side. He’s right about one thing, this country is sick of being divided, and might be ready to take another baby-step toward fixing those divisions, rather than pretending they don’t exist.