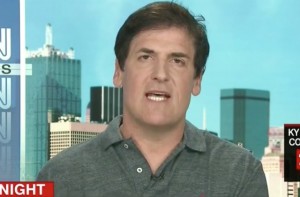 Dallas Mavericks owner Mark Cuban is throwing down the gauntlet by challenging his fellow billionaire Donald Trump to a one-on-one interview exclusively devoted to policy.

Cuban has been mocking and slamming Trump for months now, and one of his most prominent criticisms has been that Trump is dangerously lacking in policy specifics and general political knowledge. Trump appeared with Fox Business’ Maria Bartiromo on Friday morning, where he responded to Cuban’s criticisms by saying “he’s not smart enough to understand what we’re doing.”

Later on, Cuban took to Twitter to offer Trump a challenge for charity:

.1) @realDonaldTrump $10mm to the charity of YOUR choice if you let ME interview you for 4 hrs on YOUR policies and their substance.

This challenge would have a few conditions, however:

3) @realDonaldTrump and no one else is in the room to help. Just me, you and a broadcast crew.

Cuban even offered to sweeten the deal by giving Trump the $10 million with no strings attached, if donating to charity wasn’t enough of a motivator:

4)@realDonaldTrump I’ll add an option.If you need it, I’ll write you the check and you can keep the money rather than give it to charity

Finally, Cuban reminded Trump of what he said himself not very long ago:

5) @realDonaldTrump In the inmortal words of YOU. “What do you have to lose ?”