Mark Levin Goes After NBC’s Tom Brokaw: ‘Shut Up! … Do You Realize What An Idiot You Are?’ 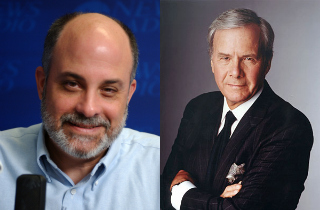 One day after he went after CBS newsman Bob Schieffer for comparing taking on the gun lobby to defeating the Nazis in WWII, conservative radio host Mark Levin took a shot at NBC’s veteran reporter Tom Brokaw for comparing silence on gun violence to not speaking out during segregation.

Brokaw (or “Broke-Jaw” as Levin referred to him) had made the comments on MSNBC’s Morning Joe Thursday morning, comparing the “good people” who stayed in their homes and remained silent as civil rights activists were beaten in the streets to those who choose to remain silent on today’s issue of gun violence.

“Have you lost your mind Tom Brokaw?” Levin asked. “Do you realize what an idiot you are? Have you lost your mind? I mean, ladies and gentlemen, the Second Amendment is a civil right. Does this man have any context for what he’s talking about? Of course not. He’s just popping off. Shut up! All of you, just shut up! You don’t even know what the hell you’re talking about.”

He continued on to chastise Brokaw, saying, “The Second Amendment is part of the Bill of Rights, Tommy. The Bill of Rights. To protect the individual. This isn’t Selma, Bull Connor, people in their homes who are being quiet. People all across America, they are speaking with their actions. They’re exercising their right under the Constitution’s Second Amendment, their individual civil liberty right, and they’re purchasing guns in record numbers, purchasing ammo in record numbers, because they’re concerned that their individual, civil, constitutional right will be violated.”

Levin also took exception with the newsman invoking the 1960s civil rights battle: “What the hell does this have to do with Selma or the south in the 1960s or the Klan takeover or the cult? What are you talking about? Do you realize how pathetic you sound? Absolutely unbelievable… So now, if you mind your own business, you purchase firearms, you purchase bullets to go in the firearms, whether you’re a hunter, a sportsman, for self-defense or whatever, whatever your reason, as long as it’s lawful, you purchase firearms and ammunition, you’re like Bull Connor? You’re like the Klan?”

“This man is a disgrace,” the radio host continued. “I don’t care if they keep putting these guys up on pedestals. They don’t deserve it. They’re a disgrace. He’s a disgrace.”

He then expanded his derision, taking shots at a slew of on-air personalities, including Brokaw and Schieffer:

Ladies and gentlemen, Washington is digging in. When I say Washington, Tom Brokaw is a creation of Washington. He may be up in New Jersey at MSNBC doing this, but he’s a creation of Washington. They’re digging in. Scarborough, little irrelevant gnat. Digging in. Schieffer, digging in. The NBC crowd, the CBS crowd, the ABC crowd, just listen to the broadcasts. CNN, and of course, MSLSD, MSLSD which would have been perfect during the times of like Brezhnev because Brezhnev and MSNBC, you know, their ideologies they’re almost like one and the same, but that for another day.

So the point is this: they’re digging in because you refuse to surrender your God-given inalienable rights and your Constitutional right to big government. And Tom Brokaw and Schieffer and all the rest of them are about big government, big government. This is why they defend Obama, this is why they defend the Democrats, this is why there’s not a federal program unless it has to do with the military, national security, law enforcement that they would support reducing then your respect. These are the phonies who are bringing news to you and are bring news to you. The absolute phonies.