Maureen Dowd: To Not Build The Mosque Would Be ‘Ultimate Victory’ For Osama bin Laden 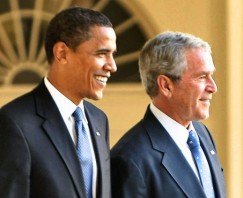 Every once and a while Maureen Dowd comes out swinging with a worthy doozy. This is one of those days. Dowd jumps right into the Mosque fray today with a column that is packed from start to stop with MoDo-esque zingers, all of them worthwhile.

Some examples. President Obama‘s follow up statements on the wisdom of the Lower Manhattan mosque were essentially cowardly (“it’s not pretty”) especially for a man who sold himself as the “paragon of high principle.” Newt Gingrich is attempting to “out-Palin Sarah Palin on Fox News” with his idiotic Holocaust remarks. And at this point MoDo thinks you’d “have to be willfully blind not to know that the imam in charge of the project, Feisal Abdul Rauf, is the moderate Muslim we have allegedly been yearning for.” Even the usually cynical Dowd seems disheartened by the turn this story has taken. I think it says something about the nature of the coverage of this story that MoDo is the person cutting through the hyperbole to make some clear and essential points.

But here’s the kicker — and since MoDo columns usually do, look for this to start driving the cable news cycle very shortly: She thinks it’s high time for President George W. Bush to weigh in.

George W. Bush understood this. And it is odd to see Barack Obama less clear about this matter than his predecessor. It’s time for W. to weigh in….As the man who twice went to war in the Muslim world, he has something of an obligation to add his anti-Islamophobia to this mosque madness. W. needs to get his bullhorn back out.