McSteamys Losing Battle Of The Sex Tape Against Gawker

McSteamys Losing Battle Of The Sex Tape Against Gawker 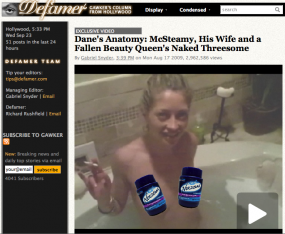 Remember the McSteamy Tapes? From way back in August, before the Tea Partiers hijacked health care, before Sarah Palin officially went Rogue, before Tiger Woods drove his car into a fire hydrant. Here’s a quick recap in case the case has faded from scandal memory in the interim.

In August Gawker got its hands on a sort of sex tape (there was no actual sex) featuring Eric Dane (McSteamy from Grey’s Anatomy) his wife Rebecca Gayheart (former 80’s Noxema girl among other things) and “beauty-queen-turned-Hollywood-madam” Kari Ann Peniche. The vid was posted on Gawker (and a very NSFW version on Fleshbot). The post got a whole lot of traffic. Shortly thereafter Dane and Gayheart sued Gawker.

It was not, incidentally, the first time Gawker has been sued for posting a sex tape. Nor will it probably be the last considering a judge just this week basically pulled the rug out from under the case. From MediaPost:

U.S. District Court Judge George Wu ruled that the couple can’t recover statutory damages for alleged copyright infringement because they had not registered the copyright to the video before Gawker posted a clip on the Defamer blog. The decision significantly limits Gawker’s liability if the actors prevail on their infringement claim. Wu informed the parties of his ruling on Monday, but has not yet filed a final order.

Also, even if Gawker ends up losing the argument in the long run it might not make much of a dent in their pocketbook:

Gawker, which did not remove the video, intends to argue that it was entitled to post the clip under the fair use doctrine. If Gawker loses that argument and Wu finds that the clip infringed the actors’ copyright they would be limited to recovering non-statutory damages, which could include the profits Gawker earned as a result of the video as well as actual damages, according to attorney Venkat Balasubramani. The extent of actual damages, however, might be minimal.

The lesson to be gleaned from all this is this: if you are even remotely famous (and at this point that definition extends much farther than anyone really wishes it did) and you are going to make a sex tape than, assuming these things will always find their way to the Internet, make sure to COPYRIGHT IT. If you are going to be humiliated on a national level (ahem Tiger Woods) you might as well share in the profit.