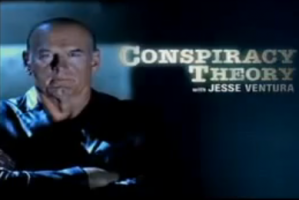 Last week, the show announced that it wouldn’t shy from controversy by taking on 9/11 conspiracy theories. (And really, what kind of self-respecting show about conspiracy theories would shy from controversy?) But Ventura had already been on the record as a 9/11 skeptic before the show. With his unique take on global warming, Ventura takes it up a notch.

Conspiracy Theory really has to be watched to appreciate its flavor. The show is paced like a 1960s spy movie with most of the transitions taken out. That is, there’s an air of urgency about everything, accentuated by music that’s probably filed under ‘intrigue’ in the TruTV audio library, and the show rapidly jumps from one plot point to the next in a span of minutes. Also, every interview has to be a key point of evidence.

In last night’s show, good guy Al Gore leads to environmentalist Maurice Strong leads to financier Edmund de Rothschild leads to the World Conservation Bank leads to the Euro leads to Climategate, somehow — and that’s all in the last 15 minutes or so. To spice things up, the camera will occasionally cut to a righteously angry Ventura, who will glower into the camera and say something like “Well, if we can’t talk to this Maurice Strong, who the hell can we talk to?”

As such, there’s much too much to recap in last night’s episode, but here’s a summary: (emphases added throughout)

TruTV hasn’t yet posted video of the episode, but there are clips on YouTube, which will have to do here until a better replacement comes around.

These two clips comprise the final third of the show, when it suddenly all makes sense, man: