Media Catch Scott Walker in a ‘Lie’; Turns Out to Be Bad Transcription

Media Catch Scott Walker in a ‘Lie’; Turns Out to Be Bad Transcription 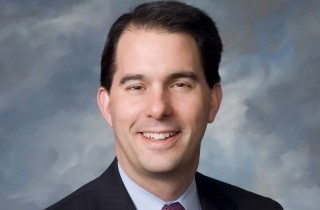 On Monday the media thought they had caught Gov. Scott Walker (R-WI) in a bold-faced lie about voting for Ronald Reagan, but the ordeal turned out to be entirely the fault of a bad transcription.

In an interview with Right Wing News last month, Walker was initially transcribed as having said he “voted for Reagan” when he was a teenager.

Several websites picked up on the interview, noting that Walker, who was born in 1967, was ineligible to vote in both Reagan elections (1980 and 1984).

The original quote, as written by the interviewer:

“I remember, I was a teenager, had just become a teenager and voted for Ronald Reagan — limited government, you know, smaller government, lower taxes, strong national defense. You knew what you were getting. You knew how a Reagan administration, a Reagan presidency was going to be better for you.”

“Scott Walker says he voted for Reagan for president, which is totally impossible,” wrote Salon. “Scott Walker Claims He Voted For Ronald Reagan, But That’s Not Possible,” wrote the Huffington Post. “Walker Claims He Voted for Reagan,” noted Political Wire. “Scott Walker Gets Busted For Lying About Voting For Ronald Reagan,” said liberal blog PoliticsUSA. Other outlets to pick up on the soundbite were Talking Points Memo and Wisconsin’s progressive Capital Times.

As Walker became the subject of mockery for supposedly claiming to have voted before turning 18, his interviewer John Hawkins cleared the air:

[D]id [Walker] lie? Did he misremember it?

Actually, it was neither.

I went back and listened to the audio. It’s a little hard to hear at that point and unfortunately, my transcriptionist made an error.

According to Hawkins, the audio itself shows that Walker said this:

A vote for Ronald Reagan meant limited government, you know, smaller government, lower taxes, strong national defense. You knew what you were getting. You knew how a Reagan administration, a Reagan presidency was going to be better for you.

“All I can do at this point is apologize for the error,” Hawkins concluded. “This was our mistake and it was very unfair to Scott Walker who is catching flack because of an honest error on our part.”

Listen to the audio, below as posted by Hawkins: