Mediaite Q&A: Fox Business’s Charlie Gasparino on the 2008 Crash and Whether Trump’s Policies Could Spell a Repeat
Mediaite Q&A

Mediaite Q&A: Fox Business’s Charlie Gasparino on the 2008 Crash and Whether Trump’s Policies Could Spell a Repeat 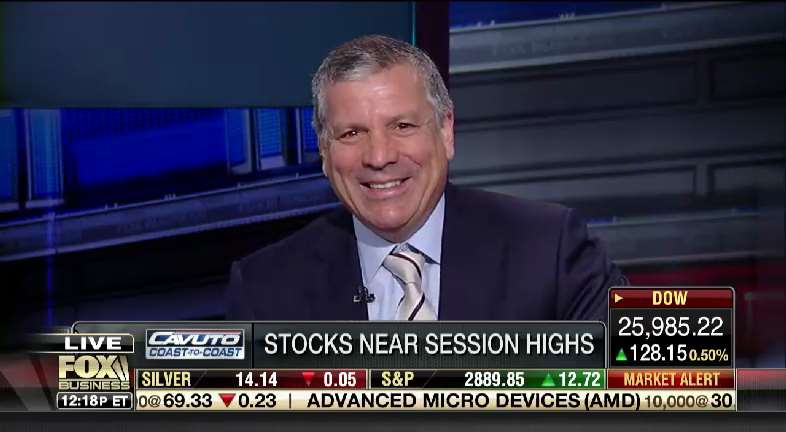 In so many ways, the memories of the crash are 2008 are still fresh. For several tense weeks that autumn, the U.S. economy was on the verge of collapse. Amidst the backdrop of a presidential election, the Dow Jones fell nearly 50 percent in just one month, and the financial system came perilously close to a meltdown.

Charlie Gasparino had a front-row seat for all of it. The Fox Business correspondent broke the news of the $85 billion bailout for AIG, and — thanks to his high-level Wall Street sources — had his finger on the pulse of the crisis from its early stages.

Earlier this week, Gasparino spoke with Mediaite to look back on the near-calamitous event 10 years later. The Fox Business correspondent reflected on the crash, and discussed whether President Donald Trump‘s anti-regulation policies could spell doom for the economy once again.

This interview has been edited and condensed for content and clarity.

Mediaite: Take us back through your reporting on the crash.

I was doing that and I was working at CNBC and I started covering, inadvertently, someone asked me to cover it. I didn’t really want to. Somebody on the desk of CNBC said, “Listen, there’s two Bear Stearns hedge funds that are imploding. They’re not doing well. They’re investing in all these housing assets. Maybe this is a good canary in a coal mine.”

And I said, “Nah, I don’t wanna deal with it. I’m busy with my book.” But then I just … I had sourcing, good sources at Bear Stearns, and I felt that there was a lot here. And the Street was involved in this whole thing. Because apparently there was money from Merrill Lynch. There was all sorts of stuff going on involving this hedge fund.

And I remember having a debate with a guy from ProPublica. Might have been at Bloomberg at the time. He’s at ProPublica now. His name is Jesse Eisinger. He said, “All these banks are going under. They’re all going under because they have this.” And I debated him and I said, “I don’t think so. They’ll go under, but not for this.”

After that, I made some calls and I was like, “That dude was right. I was wrong.”

How popular was Jesse Eisinger’s hypothesis at the time? Was he a lone voice in the wilderness, or were there more people who saw this coming than we realized?

A few people saw it. Clearly there were smart hedge funds that saw it…Goldman actually saw it. Remember Goldman started shorting mortgage backs at the end of 2006. So it was starting to percolate.

But still, the Stock Market was at a record high. At that point, I think the record was like 14,000. People were thinking the Fed was gonna bail everybody out. By the end of the year, you had a little weird calm in the market.

And then, by early 2008, it started to pick up again. And it began with the bond insurers. And then Bear Stearns happened in quick order. And then it was game on.

And it was interesting. All that time, I was writing about AIG, how they had problems and they were denying it. I mean, it was getting really heated in early 2008. But I remember it was mostly reporting out this stuff. You know, it wasn’t quite there where you saw it blow up, it was about to blow. Right after the bond insurers, then you knew things were problematic. Literally Bear was right after that.

What did you find out in the days and years after about what was going on inside the Fed leading up to the AIG bailout?

Remember how AIG happened: First it was Lehman. They declared bankruptcy. And then the credit markets started to seize up, right? And what does it mean when the credit market seize up? People forget this. They’re like, “Oh, it’s a bunch of Wall Street guys that lose their money.” No, that means you, the Average Joe, cannot get your paycheck. Why is that? Because your company generally uses short term paper to finance your paycheck. Vendors don’t pay you immediately. So you have to kind of roll over commercial paper.

And that’s what it meant. Your credit card wouldn’t work. And that would’ve collapsed, obviously, the economy in ways that it would’ve been a Great Depression. So the way AIG happened, it was interesting. Because I broke the story that said that they were considering or moving toward a bailout. And one of my colleagues at CNBC said the exact opposite on air right after I reported what I reported.

So I said they’re likely to bail them out, or they’re moving toward a bailout. Market was up like, whatever. 200 points. My colleague says, “No no no. They’re not moving from their position. They’re not getting directly involved in bailouts.” And then within a couple hours it was obviously they were.

The AIG bailout basically bailed out all the companies, all the banks, in a major way that held those toxic assets. It particularly bailed out Goldman. That’s the interesting thing. Goldman was completely bailed out by AIG.

Remember when Goldman said we don’t need the TARP money. Well they were kind of right about that. They didn’t need the tarp money specifically because they had the AIG money. When you bail out AIG and they can pay 100 cents on a dollar on the credit default swap you have on toxic debt, which is what the bailout allowed them to do, Goldman Sachs’ balance sheet is pretty stable.

And then there was more money being thrown around just because people were still worried. Right? Then, you know, you had the TARP at the end of the week. I actually broke that story. The market went up like 500 points. Then you had successive bailouts of Citigroup and Bank of America. They had to go back and get more money.

I make the point constantly that I think Glass–Steagall should have been kept into effect. That these banks are too big. That I don’t like the fact that you can merge a commercial bank with a risk-taking Wall Street firm. My problem is that actually subsidizing the risk because it’s too big to fail. The commercial bank has insured deposits. They’re never gonna let it go under. So you basically subsidize risk taking.

Is there a product on the market now, that has the kind of risk as a CDO or a swap that the Street is looking at and saying, “Oh boy, this one’s a danger?”

Great question. It’s usually what you don’t know that kills you. When Wall Street was making a lot of money in 2005, 2006, I knew it was tangentially [related to] the mortgage backed securities. I didn’t understand that the CDO was it. I didn’t get that granularly.

People weren’t talking about this destroying the economy. And I bet you, even Goldman and all those hedge fund guys that were shorting the stocks, Einhorn and you name it, they were shorting it not thinking that the world would come to an end. As a matter of fact, I know because I spoke with Einhorn about this afterwards. He thought they would bail out Lehman.

So I’m just saying, it’s never what you think that gets you. Usually. That’s the problem with regulation. You try to stop everything from happening. It’s the stuff you don’t know about. And I think the smart way to do regulation is to make sure that there’s no bank that’s too big to fail. Because if people think they’re gonna go under and lose all their money, they generally react differently. They don’t take the chances.

You’ve spoken out here clearly in favor of some regulation, like Glass–Steagall for instance, but obviously the President right now is on an anti-regulation torrent. Is that position tenable in our current economic state?

I don’t think it’s tenable with banks and I’ll tell you why. I’m for less regulation, just so you know.

They should say you can’t merge a commercial bank with an investment bank. And if you wanna do that, we’re not gonna insure your deposits. Now if they did that, I wouldn’t care. Take down the regulation. Everybody knows that Citigroup, if that’s the case, they wanna keep an investment bank and a commercial bank, then they’re not gonna get insured deposits. Fine. You’re the average guy, you roll the dice with them.

But that’s not what they’re doing here. They’re reducing regulations and they’re still ring-fencing their assets.

Joe DePaolo is a senior editor for Mediaite