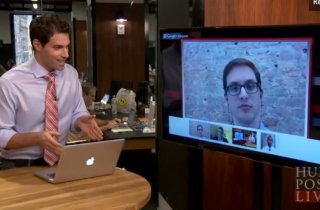 Monday afternoon, Mediaite editor Andrew Kirell appeared on HuffPost Live to discuss why the Republican Party has seemingly disregarded Indiana Republican Gov. Mitch Daniels‘ call for a “truce” on social issues in order to focus on the looming federal budget deficit. For examples of this disregard, host Mike Sacks pointed to Rep. Todd Akin‘s “legitimate rape” comments in addition to the GOP’s 2012 platform, specifically its no-exceptions view on abortion, its refusal to consider “civil unions”, and its targeting of all forms of adult pornography.

Conservative commentator Lenny McAllister made the case that the GOP has strayed from the “truce” because they’ve continually “taken the bait” from Democrats who understand that “the contrast drawn on social issues benefits President Obama.” He emphasized that the GOP needs to make their convention speeches the focus of the news cycle, as opposed to “getting mired in these [social] issues,” in order to bring independent voters back into the fold.

Sacks added that it is difficult to shift focus from social issues when, as Mediaite reported last week, the party’s platform delegates made a fuss over the inclusion of “civil unions” into the party’s same-sex marriage plank. Kirell agreed, adding that Romney advisor Kris Kobach‘s refusal to include same-sex marriage rights was tantamount to saying “We’re conservative and we believe in limited government… only on things we don’t find yucky.”

GOProud Executive Director Jimmy LaSalvia insisted that the “public fight over the platform clearly didn’t have the best interest of the campaign at heart” and shouldn’t be taken as a representation of the party’s priorities at present. “Jobs and the economy” are the key issues right, LaSalvia said, adding that “any time we distract from that, we play into Obama’s hand.”

Sacks asked the group whether the party’s conservative social positions will alienate younger voters who tend to be okay with same-sex marriage and marijuana decriminalization. Kirell offered up himself as “the young libertarian voter” who is “definitely” not going to vote for President Obama, but feels unconvinced by the GOP that Romney would be any better.

“These social platforms of the Republican Party are just as big government as the economic policies of the left,” Kirell said. “That doesn’t convince me that they are actually small-government advocates.”

Kirell then added that the party’s “hypocrisy in supporting big government social platforms” prevents the GOP from “opening up to be the ‘big tent’ party and incorporate young voters like me with libertarian sensibilities who are tired of these old-world views on gay marriage and pornography.”

McAllister interjected that even during the Republican primaries, the candidates did not do a good enough job pivoting away from these divisive social issues “which take the momentum away” from winning the election, and shift focus from what the party’s base truly wants: to put people back to work.

Kirell responded that GOP candidates like Michele Bachmann and Rick Santorum were received well precisely because the Republican base wasn’t going to go for someone like Ron Paul who is socially conservative but doesn’t believe the federal government should enforce his social values. “That should be the rhetoric the Republican Party should take on,” Kirell said, “but candidates [like Santorum] were popular because much of the base wants to hear this stuff.”

Watch the full segment below, via HuffPost Live: