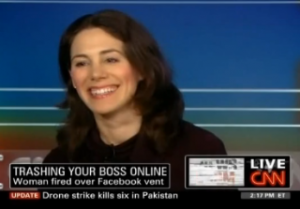 I was on CNN on Thursday to discuss the recent ruling by the National Labor Board, which ruled that an employee’s use of Facebook counts as legally protected free speech where discussing work-related issues, even where it disparages the employer or the employee’s supervisors. Still, as I told Ali Velshi, that does not mean you should rush to trash your employer on social media:

VELSHI: This is not really about laws. This is more about, is it wise in this economy to be trashing your boss on Facebook?

SKLAR: You’ve hit it exactly. There is the legal point, and then there is just good advice. And good advice is, just watch what you say on Facebook, on Twitter, on social networks, because being sued is not fun. Filing a lawsuit is not fun. And being fired and having to do all of those things is not fun. So just avoid it.

VELSHI: Now, from your perspective as a media observer and a media critic, there is something about this whole thing, is that somebody gets fired and then they challenge it. And we want to see how far we can push that envelope. Where do you stand on that side of things? Should this person have had the right to criticize her boss on social media?

SKLAR: Well, clearly, yes. Right? She won the case. And I think that it’s an important ruling, because what it says is that that is public conversation, but it’s in the [protected] realm. It’s like water-cooler conversation, and just like water-cooler conversation in an office…[i]t was on a Facebook wall where other employees jumped in. So it was deemed to be sort of protected workplace conversation. That doesn’t mean that you’re free to say, “My boss is an idiot,” “My boss is ugly,” “My boss is stupid,” “My boss has bad hair.” Those are things that, you know, you push the envelope a little bit. But at the very least, if you must criticize on Facebook – and there’s by no means any reason to believe that non-unionized employees are protected – you might want to make sure you keep it to specific policy considerations.

Then I made fun of Facebook’s statement on the ruling where they say “Just as in your offline life, there are people you want to be more open with than others, which is why Facebook gives you complete control over how you share information.” Oh that’s right, Facebook totally wants us to be super-duper private. For more information on this, Geekosystem has an excellent breakdown. Watch below.