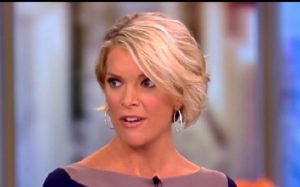 It is no secret that Fox News’ Megyn Kelly has had her issues with President-elect Donald Trump, first stemming from their contentious exchange at the first GOP presidential debate and continuing through the rest of the campaign, with Trump railing against her on Twitter at various times.

Well, it appears that Kelly believes that those problems haven’t stopped now that Trump is elected, and specifically blames one person in Trump’s circle for stirring up all kinds of online hate towards her.

“The vast majority of Donald Trump supporters are not at all this way,” Kelly told an audience in Washington. “It’s that far corner of the internet that really enjoys nastiness and threats and unfortunately there is a man who works for Donald Trump whose job it is to stir these people up and that man needs to stop doing that. His name is Dan Scavino.”

As you may recall, Scavino essentially threatened Kelly on Twitter after a combative interview she had with Newt Gingrich.

.@MegynKelly made a total fool out of herself tonight- attacking @realDonaldTrump. Watch what happens to her after this election is over.

Kelly has also explained that she’s had to deal with security threats due to all of the hate online and she and her children have to constantly be under the protection of armed guards.