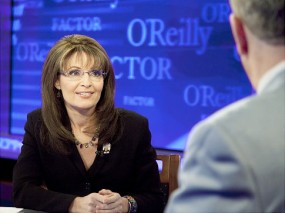 “I do think that one thing that is going to be tougher now with Sarah Palin playing such an active role [on Fox News] is the slogan ‘fair and balanced.’ What does that mean, when the two leading Republican candidates, according to polls, Mike Huckabee and Sarah Palin, are both on your network regularly?”

Apparently, the hiring of Sarah Palin by Fox News has even some prominent conservatives worried. The concern being, of course, that Palin and Huckabee are not only clearly professing particular political views (the number of cable news talking heads who are not doing this is an increasingly diminishing number regardless of the channel you tune into) but they are also the two leading GOP contenders for the 2012 Presidential race. Meaning they are being served a very large platform on which to unofficially campaign for the next two years. It is sort of the equivalent to MSNBC giving…actually I’m not sure there is an equivalent since all of the leading Dem contenders in 2005 were in elected office at the time, and we now have an incumbent president.

What is also might mean, however, is that Huckabee and/or Palin are forced to make an early decision re; a 2012 run — the FCC equal-time rules are fairly strict where pols are concerned and fundraising is no small undertaking. Still, at the rate we’re going we are still about a gazillion news cycles away from 2012 and a lot can happen in the interim (just ask Obama what a difference a year can make in popularity). Video of Medved clip below.