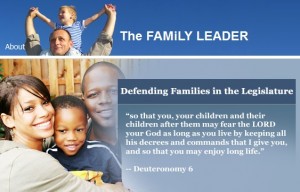 Missed in all of the pornography-banning outrage over the (anti-gay marriage) marriage pledge that GOP hopeful Michele Bachmann (R-MN) was first to sign is a bit of not-so-fine print that makes a stomach-churning comparison between the era of slavery and the presidency of Barack Obama. To be fair, there’s a lot to hate in The Marriage Vow, but right at the top of page one is the paragraph that insists that black children born into slavery had a better shot at two-parent glory than those born under President Obama’s watch: (asterisk mine)

Slavery had a disastrous impact on African-American families, yet sadly a child born into slavery in 1860 was more likely to be raised by his mother and father in a two-parent household* than was an African American baby born after the election of the USA’s first African-American President.

Yes, how sad! Can’t you just wait to see how The Family Leader came to that conclusion? First, though, let’s let Jack and Jill Politics‘ Jill Tubman vent a little (I recommend you read the whole thing):

Given that families were broken up regularly for sales during slavery and that rape by masters was pretty common, this could not be more offensive. I mean, putting aside the statistics on this, which are likely off-base, I could not be more angry. When will Republicans inquire with actual Black people whether or not we’re ok with invoking slavery to score cheap political points?

To be fair, The Marriage Vow doesn’t appear to be arguing that slavery was good (hey, they said it was “disastrous”), but rather, that Barack Obama is worse than slavery. That’s a key difference that needs to be highlighted. Besides, they used a footnote to a study by black scholars, so shouldn’t Jill just relax a little?

For my money, this is where the story gets really disgusting. The study that they cite was published in 2005, which means that any comparison to slavery must be made, not with our first black president, but with our 43rd white one. Furthermore, the data in the study only dates back to 1880, which means they not only had to stretch their pretzel to include Barack Obama, but also to conflate the data with slavery. They appear to be basing their conclusion on these two points from the study:

According to the latest data, only 35 percent of Black children live with married parents whereas 76 percent of White children do. (page 9)

Any nuclear households in 1880 would have contained exactly zero children “born into slavery in 1860,” or out of slavery, because they would all have been 20 years old by then. This is important, because it demonstrates a specific intent, not just to make a revoltingly stupid comparison between the slave era and the present day (black homelessness was probably lower in slave states, too), but to tie that comparison to our first black president.

If The Family Leader had actually bothered to look at marriage during slavery, who knows how they would have felt about those pro-marriage slave owners:

Most slave-owners encouraged their slaves to marry because they believed that married men were less likely to rebel or run away. Others hoped to increase the size of their slave populations by urging (or, as the case may be, forcing) their slaves to marry and have children. By age twenty, female slaves were expected to have given birth to at least four or five children. To expedite the reproductive process, some plantation owners promised to free female slaves after they had produced fifteen children.

Although many slaves did want to get married, several men confided in their autobiographies that they were reluctant to marry women from the same plantation. For example, as former slave John Anderson explained, “I did not want to marry a girl belonging to my own place, because I knew I could not bear to see her ill-treated.” Moses Grandy agreed when he wrote that, “No colored man wishes to live at the house where his wife lives, for he has to endure the continual misery of seeing her flogged and abused without daring to say a word in her defense.”

Furthermore, as the excerpts below attest, one of the biggest dangers that married couples faced as slaves was the possibility of being separated from one another. Because the American legal system did not recognize slaves’ marriage or family ties, slave owners were free to sell husbands from wives, children from parents, and sisters from brothers. According to a study of records kept by the Freedmen’s Bureau, over 32% of slave marriages were destroyed in this way.

It remains to be seen whether Michele Bachmann saw the offending paragraph, the very first bullet point in the pledge’s intro (Mediaite has reached out to Bachmann’s campaign, and is awaiting a response), or whether she will withdraw her signature upon discovery, but she will likely have to respond in some way. Jamil Smith, a segment producer for The Rachel Maddow Show, tweeted the link to Jill Tubman’s post this morning, and if Rachel Maddow covers the story on her show, there’s a good chance that it takes root in the mainstream press.

Either way, this pledge (perhaps unwittingly) reinforces Bachmann’s history of ignorance about slavery (and ignorance of it). While her initial instinct might be to double down, she should resist that urge strongly in this case, rescind her support for the pledge, and maybe just stop talking about slavery.