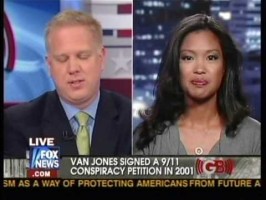 As we reported yesterday, Senator Mary Landrieu (D – Louisiana) is under fire for agreeing to vote for debate on health care reform only after securing $300 million in aid to her home state. The criticism took a nasty turn, as the right’s two most prominent commentators – Glenn Beck and Rush Limbaugh — referred to Landrieu as a prostitute, and Time‘s Mark Halperin threw a sexually enhanced hairdo on her.

On last night’s Countdown, Keith Olbermann again asked where was the outrage from the conservative feminists (video below). We decided to go and find it.  I reached out to several conservatives who have been critical of this type of behavior from the left, including Michelle Malkin, Ed Morrissey, and Mary Katherine Ham.

First, I asked Mary Katherine Ham about the brouhaha. She had written a column about Halperin’s photoshop for The Weekly Standard, using it as a springboard to make some points about Huffington Post’s editorial standards. Her column didn’t mention Beck or Limbaugh, with good reason (via Twitter):

I added it to opening. Hadn’t heard about it. I obviously feel the same way about that as about Halperin’s move.

Here’s the update to her column:

(So nobody gets caught up in calling me out for not calling out right-wingers, Beck and Limbaugh were inappropriate on Landrieu, too.)

I asked Hot Air’s Ed Morrissey about it on his show yesterday, and he hadn’t heard about it yet. He sent me his reaction this morning:

People have called politicians of both genders whores and prostitutes for a very, very long time.  What made Halperin’s photoshop over the line was that the reference he used was all about semen and not at all about prostitution — the main character in “There’s Something about Mary” wasn’t a prostitute, and was more or less virginal, at least presumably.  I have no idea what Halperin was thinking with that one.

Finally, Michelle Malkin, whom Keith Olbermann invoked while naming Beck and Limbaugh to Monday night’s version of  “Worst Persons,” had this to say:

I would not use — and did not use — that kind of rhetoric in my criticism of Landrieu. Having been called a whore, prostitute and far more degrading sexual epithets by countless times by liberals who never have to apologize, I’ll say this: Women in politics deserve to be treated the same as men. Call them sellouts, corruptocrats, bribe-takers, and backroom wheeler-dealers — but leave the streetwalker analogies at the Bunny Ranch where they belongs.

And lefty concern trolls, spare me all the over-the-top outrage about Rush and Beck. Their jabs at Landrieu are nothing compared to the unending attacks on Sarah Palin.

Since I’ve already said my piece, and because they don’t have the opportunity to respond further, I’ll let their comments stand on their own.

What I do find interesting is that these kinds of attacks on a Democratic Senator managed to stay off the right’s radar, even though they were leveled by its two most visible figureheads. On the other hand, Sarah Palin’s magazine cover is big news on both sides, as was Alan Grayson’s “K Street whore comment.”

I would also observe that the outrage from the left on this is somewhat muted, perhaps because Mary Landrieu’s opposition to the public option puts her at odds with them.

It seems to me that this is yet another example of politics trumping simple human decency.