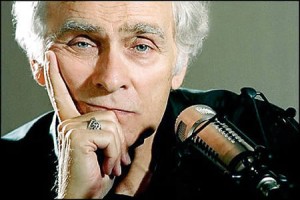 Liberal radio host Mike Malloy can hold his own against conservative on the airwaves in terms of awesomely quotable provocations and ridiculously dismissive name-calling (the two most important talk radio qualifiers behind ratings and ad revenue). On yesterday’s show, he discussed Shirley Sherrod’s lawsuit against Andrew Breitbart and didn’t disappoint at all in terms of quotes or names. After musing that right-wingers “always attack women,” he admitted to the audience that he didn’t think it was going to be a very good show. We’re gonna disagree.

After going over the details of the case, the best moments came when he issued this personal message to Breitbart:

“Did you have parents? Were you brought up in an outhouse some place, in a toilet, in a public urinal? Did you have parents and this is how they raised you? To deliberately and maliciously attack a woman for sport, you pig? Is this how your parents brought you up? Shame on you, Breitbart. And I bet your parents, if they’re still living, just hang their heads in shame about what a piece of human waste they raised.”

Malloy said he knew Breitbart would get the message because his “little cockroach colleagues in the right-wing blogosphere are busily recording everything” he says. Sure enough, a video of the moment is now the number one feature on Breitbart.tv with the claim that Malloy threatens Breitbart (Malloy says some mean things but that’s a stretch).

Now it’s time for the big question of political talk radio: When your enemies seem to enjoy your attacks more than you do making them, is it time for a different attack?

Check out the clip from The Mike Malloy Show below (H/T Breitbart.tv):