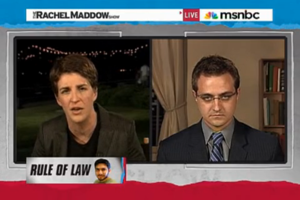 Tonight’s episode of The Rachel Maddow Show featured something of an anomaly: praise for Glenn Beck. The MSNBC host discussed the disapproval from some on the right of Times Square bombing suspect Faisal Shahzad having his Miranda rights read to him and noted that Beck, on the contrary, had declared that it was important for the survival of the Constitution for Shahzad to have those rights. Maddow defined the rift as one between “paleoconservatives” and libertarians, a useful pair of terms if only their definitions were consistent.

Discussing the Times Square bombing attempt with program regular Chris Hayes, Maddow tried to make sense of Beck’s defense of Shahzad’s rights in relation to calls from many right of center voices calling for a suspension of Constitutional rights, trying to find a link between an “old grudge” Hayes had pointed out between conservatives and Miranda rights and the current reaction to Shahzad’s arrest:

“I wonder also if we are at a point in this where there is a fork in the road between… law-and-order paleo-conservatives, and libertarian conservatives. In that we’re seeing people like, most notably today, Glenn Beck, host on the Fox News Channel, saying, actually, it’s important that the suspects are read their Miranda rights… to see a split between somebody like John McCain, and somebody that is sort of the new right, the new libertarian right, in the form of Glenn Beck– does that split map with that old grudge against Miranda rights in the conservative movement?”

Maddow is likely on the right track in distinguishing between the libertarian right and what she calls the “paleo-conservative” right. With an issue like applying the Constitution, the line between the two is drawn pretty clearly, but take a more complex one– say, illegal immigration– and suddenly distinguishing the libertarians from the conservatives becoming much more difficult.

Maddow’s foray into the right-wing organizational structure wasn’t the first time the term “paleo-conservative” came up on in the cable news world today. Judge Andrew Napolitano hosted a segment today on his online Fox News program Freedom Watch discussing the possibility of a rift between “paleocons” and libertarians on illegal immigration. Here, compared to the libertarians on the panel, Glenn Beck would be the paleocon. Beck has repeatedly and adamantly opposed allowing illegal immigrants to get away with crossing the border, putting him definitively in the “paleocon” camp with Freedom Watch guest radio host Jack Hunter, as opposed to GMU economics professor Don Boudreaux, who defended an open border.


If there is a narrative of division between the two factions on the right unfolding, it is a bit more complicated than either segment delved into, because there is no concrete split between either side. Most libertarians have not distinguished their ideology from the larger right-wing umbrella– that is to say, joined the actual Libertarian Party– nor does there seem to be a mass movement brewing to do so. Rather, naturally-occurring disagreements are made more prominent by the diversity of right-wing voices in the media today, which Beck is, in some respect, the face of–as Maddow emphasized)– but certainly not the spokesman, as the discussion on Freedom Watch proved.