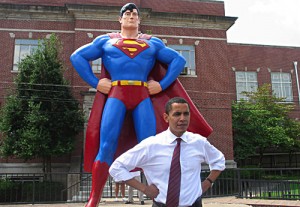 As Mediaite‘s Noah Rothman reported earlier, President Obama is a horrible, miserable failure at convincing Americans that he sucks, but the Romney campaign deserves at least some of the credit. As Wonkette‘s Josh Fruhlinger notes, the Mitt Romney Press Shop may have overdone the debate expectations game just a tad, sending a memo to reporters last week that should have debate viewers waiting for President Obama to reap Mitt Romney’s soul onstage, sending the very rocks and trees into scurrying for cover, and awakening Cthulhu from his slumber to cower at his debating skills.

The debate expectations game has been taken to ridiculous extremes this time around, but at a certain point, you’ve stopped tamping down your own expectations, and started eating your own legs. The Obama campaign (and its supporters) have made the case that Romney is fresh from the fight, having participated in three seasons of The Real World‘s worth of Republican primary debates, while the President has been busy being the President (and whatnot), but voters aren’t buying it. Maybe they remember that Romney’s 73 primary debates featured a selection of random customers from the Mos Eisley Cantina, or that Romney didn’t even do that well against them.

…Voters already believe — by a 25-point margin — that President Obama is likely to do a better job in these debates.

President Obama is a uniquely gifted speaker, and is widely regarded as one of the most talented political communicators in modern history.

…it’s clear that President Obama will use his ample rhetorical gifts and debating experience to one end: attacking Mitt Romney.

I love that last one. What’s he supposed to do? Use his ample rhetorical gifts to explain what a fearsome debater his opponent is? Oh, right.

Worse than this admittedly over-the-top memo, though, is the fact that it’s just an extension of what seems to be the Romney campaign’s new stealth strategy: convincing voters that, while their guy really, really seems to suck, he actually doesn’t, and will quickly prove it once they’ve elected him. It’s a bit like demanding a spot in the World Series, even though you appear to be losing all of your games.