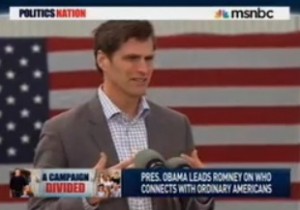 On Tuesday, Politico published a narrative-setting piece which claimed that Republican presidential candidate Mitt Romney‘s abrupt makeover for Wednesday’s debate, and beyond, was the result of a Romney family campaign coup in which “The family pushed for a new message,” a message that apparently amounts to calling President Obama a boy. Mitt Romney did it once during the debate, while Ann Romney called the President and his campaign “petulant children” this morning on Fox News. At a campaign event on Tuesday, Romney son Josh Romney filled in the hat trick by calling the President “an obstinate child.”

There are a few different layers to this story. That Politico story has been met with skepticism, eloquently stated by Dana Milbank after Rev. Al Sharpton played the video of Josh Romney on Tuesday night’s PoliticsNation:

What Milbank and WaPo‘s Erik Wemple are too polite to say (Wemple puts together all the clues, but stops short of giving it a name) is that this story is obviously a spoon-fed narrative-builder, a collection of official leaks dressed up as a trend piece, designed to give Mitt Romney cover for his latest round of flips and lies, and to give his campaign cover for things like calling President Obama a boy.

I’ll stipulate, now, that Mitt Romney was the only one to use the actual word “boy,” in what appears to have been a remnant of the zinger strategy, and acknowledge the possibility that Josh Romney and Ann Romney were calling the President some other kind of child, perhaps a little girl or a pansexual forest sprite, but the default here is boy, and three times is not an accident. This is meant to be provocative.

However, it’s probably not meant to provoke the resentful white base that Romney already has locked up (any time something racist slips out from here on out, it’s probably by accident), but rather, to provoke a column like this, which in turn provokes people to rally to the Romney family’s defense. So be it, defend away. If the Romney family’s new campaign message isn’t intended to call President Obama a boy, then they probably shouldn’t have done it three times. I doubt very much that Michelle Obama would get a pass on three “Whitey” tapes.

As for this “campaign mutiny,” or whatever, this is nothing more than a craven move by Mitt Romney to hide behind his family while he piles on the lies, and blows off the right wing of his party. Wake me up when someone gets fired, or gets hired, or even has their red stapler confiscated.