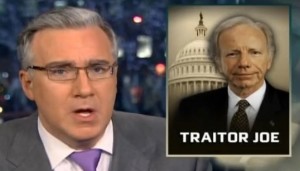 Health care reform is a subject that often elicits blank stares and yawns from an audience. It not only lacks a clear and simple narrative; it’s hard to follow the characters involved. Recent debate over health care has forced the topic back on the cable news rundowns, and at least one cable network has found their villain. His name? Joe Lieberman (sturm and drang)! Turns out, he plays the part pretty well.

With a rumored vote on Health reform looming before the end of the year, the stakes are rising — not just with regard to the medical and insurance implications, but the political implications as well. And seeing as the Democrat-turned-Independent Lieberman is already viewed as a backstabbing Brutus by those on the left, a vocal Lieberman in opposition health care reform did not please the talent at MSNBC.

But what has Senator Lieberman done to raise the ire in for those on the left? He recently threatened to filibuster any health care reform that includes Medicare for anyone under the age of 65. Why is this so offensive? Allow Keith Olbermann to explain”

Olbermann then aired the clip of Lieberman contradicting his current position from just three months ago.

Rachel Maddow delivered the second part of the one-two punch last night, and was surgical in her use of quality research. She focused on some rather large inconsistencies in both Lieberman’s rhetoric and policy.

First she aired a clip from a November 8 appearance in which Lieberman told Fox News Sunday Host Chris Wallace:

“If the public option plan is in there, as a matter of conscience, I will not allow this bill to come to a final vote. I would vote to stop final vote on this health care reform bill. I would use the power i have as a single senator to stop a final vote.”

Thanks to the producers who work with Maddow, last night we learned that back in 1995, Lieberman introduced an anti-filibuster measure with then-fellow Democratic Senator Tom Harkin. In fact, he was quoted as saying:

“The filibuster, as wrong as it is, and as unfortunate as its consequences have been because it’s created gridlock, it has increased the power of every individual senator. And senators are not that good at yielding individual power.”

Both segments go to great length to explain Lieberman’s erratic comments on health care, and both Olbermann and Maddow both did well in logically breaking down the, well, illogical positions of the senator from Connecticut.