MSNBC’s Sharpton Invited to White House to Discuss How to Work with GOP — No, Really

MSNBC’s Sharpton Invited to White House to Discuss How to Work with GOP — No, Really 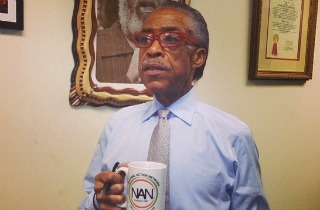 There’s obvious and then there’s painfully obvious. And in the case of Al Sharpton declaring that Tuesday’s resounding defeat for his party was not the fault of an unpopular president nor inept candidates, but of Hillary and Bill Clinton, it’s painfully obvious where the activist/host/liaison is getting his marching orders are coming from:

As he’s enjoyed mentioning in the past, Sharpton has a direct line to the White House. He’s visited numerous times, trades daily emails with Ms. Jarrett. So when the Democrats went down in flames three days ago, guess who President Obama met with the next day? Not Mitch McConnell, not John Boehner, not DNC Chairwoman (for now) Debbie Wasserman Schultz. Instead, it’s was MSNBC’s ratings — challenged 6:00 p.m. host (along with other civil rights leaders), a White House official had confirmed. On the docket–because Sharpton is obviously an expert in all of these things — was Obamacare implementation, education and criminal justice. Speaking of criminal (in)justice, just what is Tawana Brawley up to these days?

Per the White House communication team: “The President also highlighted how we are looking forward to working with the leaders over the next two years to advance these and other crucial issues facing the country.”

It appears Sharpton must have been in the bathroom during the whole working-with-other-leaders part, as he proceeded to stage an upside down protest (seen here) of Republicans on his show yesterday.

If you’re wondering why the President seems to be getting nothing but bad advice these days with the likes of Plouffe, Axelrod and Gibbs gone, or how this administration has become such a rudderless ship with no port, look no further to the kind of people Mr. Obama is turning to for council in times of need.

For this part, Sharpton uses his national TV platform to attack the Clintons, who won’t be trading Christmas cards with Ms. Jarrett anytime in the next century. It all seems so nice and neat in retrospect: Sharpton goes to the White House and leaves with not an interview but instructions instead. Hillary and Bill’s coattails during this campaign season proved to be quite short…this is true. And with Hillary already distancing herself via blaming the president for not heeding her advice on ISIS while she was still Secretary of State, any bond between the Obamas/Jarrett and the Clintons is already likely long gone.

Al Sharpton serving as a proxy soldier for the Obama White House is undoubtedly the latter.