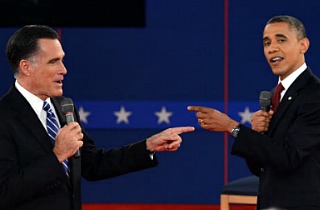 A Washington Post-ABC News poll released on Tuesday reflects how poorly the Affordable Care Act’s roll-out has been received by the public and how badly the health care reform law’s implementation is reflecting on the president.

President Barack Obama’s job approval and personal favorability ratings are at all-time lows for that survey. Two thirds of adults disapprove of the ACA’s implementation and 17 percent more people disapprove of the law than approve of it. Perhaps that survey’s most shocking finding though was that, if voters had 2012 to do all over again, voters would back for Mitt Romney over Obama.

Among adults, the question of which 2012 candidate they would vote for is split at 47 to 47 percent. However, among registered voters, 49 percent told WaPo-ABC pollsters that they would support Romney over 45 who said the same of Obama.

While the president has lost ground with voters and adults as a result of the ACA, a majority of adults and registered voters do not believe the president “intentionally misled” the public when he said repeatedly that Americans could keep their health plans if they approved of them.

There are few pieces of positive data for ACA supporters to promote in the latest WaPo-ABC survey, but one sign that voters have not entirely given up on the law is that many still have hope that the implementation phase can improve. By 49 to 49 percent, voters are split on whether they “think the federal government can recover from its problems implementing the new health care law and get it working successfully.”