Must Reads: How Obama Went from Constitutional Law Professor to NSA Defender 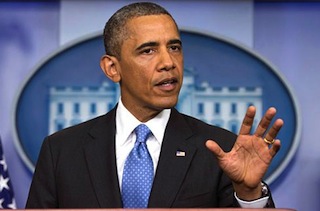 Every a.m., Mediaite publishes a primer of what the interweb machine is writing, talking, tweeting, and blogging about, so that you may fool friends and family into thinking you are a trove of information and insight. Today: Obama’s long walk from constitutional law professor to defender of the surveillance state; previewing his NSA speech tomorrow; the new anti-Obamacare talking point; and more.

Ahead of President Barack Obama’s speech on the NSA at the Justice Department Friday, members of the administration are indicating that he will task Congress with a role in developing limits and oversight to the agency’s vast surveillance programs. Obama hopes to both quell fears the security state has gotten out of control, and reassure allies over revelations of international surveillance.

As with his previous move, ultimately unnecessary, to put military action in Syria to a congressional vote last fall, this gesture toward Congress is likely to draw criticism for weakening executive power, especially as this Congress couldn’t pass gas.

Peter Baker tracks how Obama went from a constitutional lawyer highly critical of post-9/11 surveillance policies to presiding over their expansion. A taster:

By summer 2008, with the Democratic nomination secured and the White House now a real possibility, Mr. Obama voted for legislation essentially ratifying Mr. Bush’s surveillance programs. Mr. Obama realized he would “take my lumps” from the left and said it “was not an easy call for me,” but he argued that putting the programs under the jurisdiction of the intelligence court restored accountability.

As a result, after he won the election, surveillance issues were off his agenda; instead, he focused on banning interrogation techniques he deemed torture and trying, futilely, to close the prison at Guantánamo Bay, Cuba. “There wasn’t really any serious discussion of what N.S.A. was up to,” said a former intelligence official, who like others did not want to be named describing internal conversations…

The battle lines are being drawn for the next Obamacare fight, this one involving provisions in the law designed to kick in if the exchanges fail to enroll enough young, healthy people to reach the risk pool’s targeted mix, leading to escalating premiums. Charles Krauthammer signalled several weeks ago that these provisions could be termed a “bailout,” if, you know, anybody needed a nice loaded term for a talking point, and sure enough Senator Marco Rubio (R-Immigration Reform) called them just that in an op-ed this week. TNR’s Jonathan Cohn breaks down what these provisions are, why they’re not a bailout in any meaningful sense of the term, and why they make sense within the bill.

Dealing with your impersonator during a karaoke session on a Jamaican cruise is just not something most people have to worry about.