NBC’s Chris Jansing Corners Obama: ‘Do You Feel Any Responsibility For the Election of Donald Trump?’ 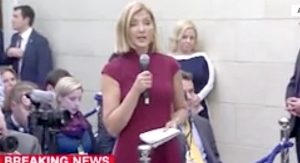 President Barack Obama is abroad this week for the final trip overseas of his Presidency, marking the occasion with a stop in Greece to acknowledge U.S.-European relations. President Obama spoke alongside Prime Minister of Greece Alexis Tsipras, and predictably, the two faced questions from the press regarding the stunning outcome of the recent stateside presidential election.

NBC News’ Chris Jansing asked President Obama, “Do you feel any responsibility for the election of Donald Trump?” indicating that during an interview earlier this year, the President told Matt Lauer to wait for the election results before weighing in on the exact topic.

“I still don’t feel responsibility for what the President-elect says or does,” replied President Obama, “but I present to him and the American people my best ideas about how you move the country forward.”

Obama continued by noting that he will, “pledge to work with [President-elect Trump] on those things that advance the causes of security prosperity, inclusiveness in America.”

The outgoing Commander in Chief fell short however in drawing parallels to UK Prime Minister Theresa May and National Front French presidential candidate Marine Le Pen. “The situation in each country is different,” he indicated.

“Last I checked, a pretty healthy majority of the American people agree with my world view,” he said, though he noted how it may not entirely seem as such given the results of last week’s election. “Sometimes people feel as if ‘We want to try something.'”

“I will never apologize for saying that the future of humanity and future of the world is going to be defined by what we have in common,” President Obama continued.

Watch above via CNN.
—
J.D. Durkin (@jiveDurkey) is an editorial producer and columnist at Mediaite.
[image via screengrab]