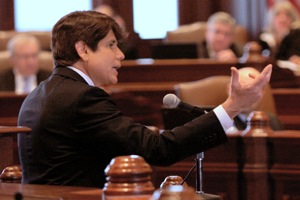 It’s been almost two years of outrageous comments, ill-advised reality show appearances, and bearable anticipation, but finally, the trial of former Illinois governor Rod Blagojevich is on the way, and the governor is getting his one wish with a slow trickle of FBI wiretaps leaking out of the courtroom. So far, twenty new conversations have been released, and they show the governor trading laws for dollars and judging potential donors by how much they love his hair.

The full transcripts of the tapes released so far are available for perusal, along with all the documents presented to the jury, on the Illinois US Attorney’s Office page. Most of the tapes verge on the mind-numbingly banal: Blagojevich spends a few conversations asking confidante Alonzo “Lon” Monk about a particularly bad bout of cold, Monk asks a donor for directions to his place, etc. But a great deal of the focus of the conversations is fundraising, and it is readily apparent that Blagojevich’s brother, Rob, was under a lot of pressure to collect $4 million at the end of December 2008, and to trade anything, even laws, to get the money. One potential donor in particular was feeling significant economic stress in his business, losing $9000 a month, and Blagojevich offered to sign a bill that would help him. In a completely unrelated instance, Blagojevich had his people push him into donating into the Blagojevich war chest. For some reason, the donor grew concerned that the public would draw some sort of correlation between the law and the money, which Lonk explained to Blagojevich in late November:

Of course, this has little to do with the charge that Blagojevich was out to sell President Obama’s senate seat, and neither do most of the transcripts. The closest to clear language about that potential trade actually has Blagojevich coming out clean. In another conversation with Monk, Blagojevich tells him that he refuses to answer phone calls from Jesse Jackson, Jr., and advises Monk to do the same, and warns that Jackson will offer them “all kinds of stuff” for the seat:

BLAGOJEVICH Yeah, he’s gonna, he’ll offer you fund-raising and all kinds of stuff.
MONK Right. Have you, has anybody talked to him?
BLAGOJEVICH I haven’t. He’s got people callin’ (BEEP) me.

The only other mentions so far of the senate seat are all up to interpretation: things like Monk saying “what are Rod’s talking points as far as the senatorial candidate? I mean I know what’s goin’ on,” and mere mentions that it’s an issue that is on the table.

As for the hair references? The SNL crew could not have come up with better lines. One of the most singular (and completely legal, as far as we know) conversations released was between the Blago brothers, in which they evaluate one donor, “Ivan,” by the fact that his wife can appreciate a good coif:

ROBERT BLAGOJEVICH: That guy, I’ll tell you what, I was very impressed. He’s got a very delightful wife. I had a chance to visit with her. She loves our hair by the way.
BLAGOJEVICH: Yeah.
ROBERT BLAGOJEVICH Loves your hair and loves my hair and because it’s all real. (Laughs) I guess. It’s kinda interesting. Very well read lady. Anyway, yeah, ah, and that’ll all go in the bank today.

Fox News had Judge Andrew Napolitano on earlier in the day to give a legal evaluation of the transcripts, who concludes that the tapes, despite the now traditional harsh language, were “not as bad as the prosecutor made them out to be”: