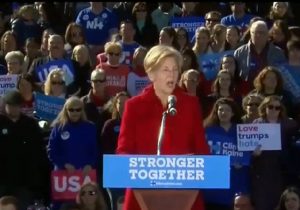 We’ve heard it all before — women aren’t fit to be political leaders because they’re too weak, because they’re too emotional, and, of course, because of their periods. The stereotype is that menstruation affects women’s brains and prevents them from making good decisions, and therefore, women can’t be effective leaders.

Of course, there’s always been the obvious rebuttal that countless male politicians have seen their careers destroyed by testosterone-driven sex scandals, but now a new study published in Frontiers in Behavioral Neuroscience  last week almost definitively puts to rest the dated notion that women’s biology prevents them from governing.

According to a new study, there is no evidence of any cognitive disadvantages to menstruation. The study followed 68 women over two menstrual cycles, and assessed memory, attention, cognitive bias, and hormone levels throughout both cycles. As Broadly put it, “in news may not surprise anyone with a period and a brain,” the study’s researchers concluded that a person’s menstrual cycle has no effect on her ability to think clearly, concentrate on multiple things simultaneously, and make good decisions.

Of course, that’s not to say that menstruation has no effect on a woman, at least in terms of physical discomfort. But if anything, the fact that women weather through this discomfort that men are spared of, and continue to get their work done, should be a testament to women’s strength — not their weakness.

And, of course, for more proof that women are better positioned to overcome and work around biological inconveniences, consider a report from late last year that men who tried male hormonal birth control were unable to endure the same side effects that millions of women go through every day.

Yet the myth that women are weak and too encumbered by emotions and hormones to make effective decisions continues to hurt and exclude women who aspire at leadership. And unfortunately, it’s unlike that one medical study can undo centuries upon centuries of cross-cultural, sexist stereotypes.

But still, political leaders like Massachusetts Sen. Elizabeth Warren remain optimistic. In May, Warren said she “wonder[ed] if America will ever be ready for male president again,” after President Trump’s first 100 days in office. Of course, these 100 days were fraught with petty Twitter wars to protect the president’s fragile male ego, attacks on women’s health, and the lingering scandal of a dozen allegations of sexual harassment and even assault from the campaign trail.

It’s difficult to imagine any of that happening with a female president, or, you know, a mature, educated adult.