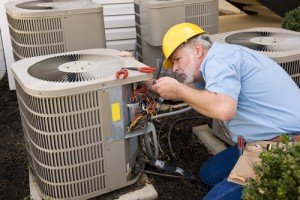 In the latest edition of political correctness gone mad, a new study published in the journal Nature Climate Change on Monday essentially argues that modern air conditioning units are inherently sexist. No, seriously — that’s what it says.

According to The New York Times, researchers Boris Kingma and Wouter van Marken Lichtenbelt determined the majority of office buildings today still use a formula based on the metabolism of men to determine temperature settings.

The original formula, which is based on the resting metabolic rate of a 40-year-old make weighing 154 pounds, dates back to the 1960s. Considering that the majority of workers at the time were men, as were the scientists who determined said formula, this makes complete sense.

Kingma and Lichtenbelt are both males, as the Times points out, but this didn’t deter them from analyzing the procedure for setting summertime temperatures in air conditioners in office environments. Turns out, the old formula is still in use, and it hasn’t changed all that much since the ’60s — even though the work force has.

“In a lot of buildings, you see energy consumption is a lot higher because the standard is calibrated for men’s body heat production,” said Boris Kingma, a co-author of the study and a biophysicist at Maastricht University Medical Center in the Netherlands. “If you have a more accurate view of the thermal demand of the people inside, then you can design the building so that you are wasting a lot less energy, and that means the carbon dioxide emission is less.”

The two researchers then conducted several experiments to gather data on the resting metabolic rates of women, and combined this information with the old formula’s data and new variables. The result is a brand new formula at air conditioning manufacturers and office buildings could implement:

Researchers found the women’s average metabolic rate was 20 to 32 percent lower than rates in the standard chart used to set building temperature. So they propose adjusting the model to include actual metabolic rates of women and men, plus factors like body tissue insulation, not just clothing. For example, people who weigh more get warmer faster, and older people have slower metabolic rates, the study reported.

Will it actually happen? Maybe, maybe not. Depends on whether or not the question of sexist air conditioning units makes its way into Fox News’ GOP debate on Thursday.