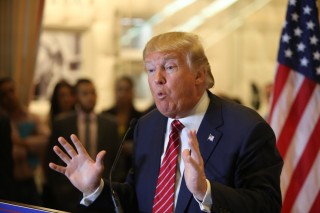 A new political action committee is worried about Donald Trump‘s ability to be president because of his hand size.  Americans Against Insecure Billionaires with Tiny Hands PAC’s new commercial requests that Trump release his hand measurements and it asks the viewer to sign a petition asking Trump to disclose his hand measurements.

“It’s a dangerous time for Americans.  We need someone who can grasp the complexity of the world and hold off the decline of a great nation,” says the narrator of the video.

The video shows people performing everyday activities while expressing their desires for the next leader of the United States.  At the end of each segment on an individual, it also shows a close up of their hands.

“If the White House phone rings at 3 a.m., will his little hands even pick up the receiver?” one woman asks concerned during the video.

“When he decides to launch his nuclear war, will his stubby fingers even be able to push the button all the way down,” another man asks.

“With our new ad, Donald Trump can no longer hide his tiny hands from the American people. That is, of course, unless he tucks them back an inch or two until they disappear inside his big boy sleeves,” said spokeswoman for the group, Katie Nguyen, in a statement according to the Hill.

The name of this new PAC was originally Trump Has Tiny Hands PAC, but they were forced to change it because of a warning from the Federal Elections Commission.  As of yet, Trump has not commented on the new ad against him.