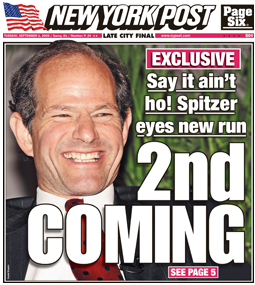 Who wants Eliot Spitzer back in office more, Spitzer or the New York Post? This morning’s cover of the Post (a classic in Post terms) says Spitzer is looking to run for office again (“say it ain’t, ho!”). The article quotes anonymous sources who say he is considering returning to public office, perhaps statewide, but provides scant evidence otherwise. But does it really matter how much truth is behind the headline? Or is it a matter of the paper creating the headline in the hopes the story will follow?

The New York Post knows where its bread is buttered, if Spitzer were to run for office again just imagine the headlines (today’s is just the tip of the iceberg)! It would be the best thing to happen to the paper since Rudy Giuliani’s short-lived run against Hillary Clinton for New York’s Senate seat back in 2000.

In all likelihood the Post probably took one look at the current statewide political field, which is dire pretty much across the board, and decided some action was necessary. Between another Bloomberg term, Gillibrand and Schumer ensconced in the Senate, and Cuomo in line for Gov, we’re not talking headline grabbers. Plus, Paterson’s numbers are so in the tank he’s almost already out of the picture. Spitzer, however, is a gift! Leave it to the Post to create for themselves a story that will carry them through another year of slumping newspaper sales.

Just wait. This story will get picked up in enough places over the next week that Spitzer will have to issue some sort of denial while simultaneously testing the waters to see in another run at something is a possibility. Also, Spitzer back in office is not that much of a stretch. Did anyone really believe the man was out of politics for good? Everyone loves a good redemption story, and New Yorkers a willing to forgive a lot in the face of ambition. And anyway, if Mark Sanford can cling to office in spite of his Buenos Aires jaunts, and Ted Kennedy can be heralded everywhere for his life-long tenacity in the face of scandals, it may be the Post, in suggesting Spitzer will soon returned to elected office, is just one step ahead of everyone else.