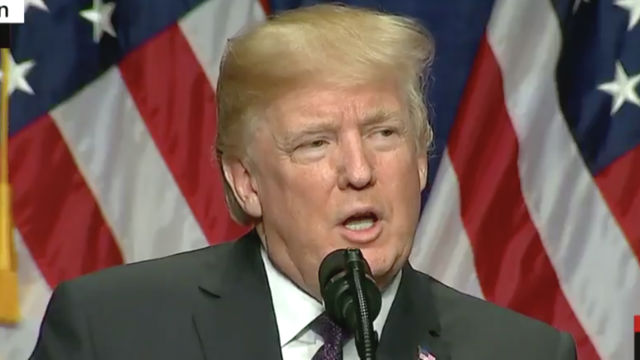 Just so we’re all clear: President Trump blocking people on Twitter is not the same thing as Iranian censorship of social media services.

You might wonder why that seemingly obvious sentiment needed to be said. Well, Newsweek––which apologized yesterday for an insensitive Martin Luther King Jr. photo––tweeted this today:

Whatever you think of the President blocking people on Twitter who say mean things, there is really no GOTCHA! equivalence on this one.

If you can't see the difference between someone blocking you on Twitter and a regime blocking whole websites and the internet, you're not a serious person. https://t.co/AOLZftoZeq

Terrible take. Blocking someone on Twitter is not comparable to mass censorship. https://t.co/iwuh1zUaKp

There is a difference between a country preventing social media access and a person making it more difficult to follow their Tweets. Good grief. https://t.co/pgjcYBloTl

Apparently, if you've ever blocked someone on Twitter, you are just as bad as Iran's regime, which blocks [squints at notes] all of Twitter and Instagram for its citizens https://t.co/g5WmBivkXw

2018 off to a great start with dumbass headlines like this one. https://t.co/ZuWm6orHCR

ah yes these two things are exactly the same and not at all completely different https://t.co/JE4B3lKyl9

I clicked. Newsweek's "bars Americans on Twitter" is defined as the following…

—> "But some of President Donald Trump's critics were quick to point out that he has blocked dozens of people from his personal Twitter account."

Really, Newsweek? How embarrassing for you. https://t.co/pgkAZfl4Bc

It's been kind of hilarious watching this take hatch today https://t.co/IdWmRZM98R

These are not akin https://t.co/idZER1HPJi

It is always worth a look at the traditional values the office of the US presidency has promoted and how the current occupant considers them himself. https://t.co/LYeNA05CRt

OMG, It's exactly the same thing!!

(This is sarcasm. Maggie should know better than to make a moral equivalence between being blocked on Twitter and blocking the whole internet to suppress free speech, but then,…liberal and all that.) https://t.co/rl7oTzIUEK

Now let's do the president's previous comments about authoritarians and we can talk about how irrelevant that is too https://t.co/IRcnwTMOT7

I'm not making a comparison, though I appreciate you want me to be. I am saying that this president, who never worked in public service prior to this, has a history of comments/acts at odds w some ideals of the US presidency https://t.co/OQ2APu0eWV

I don’t think Trump should block people. I don’t even block people. But that’s not the same as Iran blocking Twitter itself. https://t.co/Wbg1KVs1O1

I don’t either and didn’t think I was saying that. Perhaps inartfully, but my point is it’s always worth recalling Citizen Trump versus the presidency of a Trump. Doesn’t mean things are equal. https://t.co/l4Sa6jgeOb