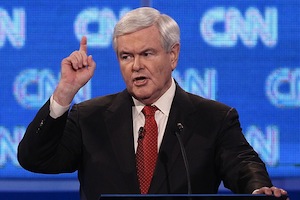 “I think Fox has been for Romney all the way through,” accused Gingrich. “In our experience, Callista and I both believe CNN is less biased than Fox this year. We are more likely to get neutral coverage out of CNN than we are of Fox, and we’re more likely to get distortion out of Fox. That’s just a fact.”

Gingrich’s remarks might raise a few eyebrows, as he famously ripped CNN for asking him about his alleged open marriage request during January’s South Carolina debate, a performance that many attribute to his success in winning the state.

“I assume it’s because Murdoch at some point [who] said, ‘I want Romney,’ and so ‘fair and balanced’ became ‘Romney,’ ” Gingrich surmised. “And there’s no question that Fox had a lot to do with stopping my campaign because such a high percentage of our base watches Fox.”

Gingrich kvetched that the conservative media resented him for being the “least establishment candidate since Ronald Reagan.”

Gingrich didn’t stop there, taking a wrecking ball to ABC’s This Week contributor George Will, a frequent critic of the former Speaker of the House.

“In the case of Will, I was on [George] Stephanopoulos on Sunday morning with him, and it was kind of a ‘You’re not allowed to run for office — I mean, if you could run for office, why am I not running for office?’ ” Gingrich observed. “And it’s almost like they were personally offended. You know, ‘This can’t be real, and how can this guy go do that?’ I got that reaction from Will a few years back about writing a book because I’m supposed to be a politician. He’s supposed to be the writer. Well, I’ve now written 24 books, and 13 of them are New York Times bestsellers. I mean, there’s a morning when George ought to just get over it.”

Gingrich affirmed he would continue to campaign all the way to the convention in Tampa.